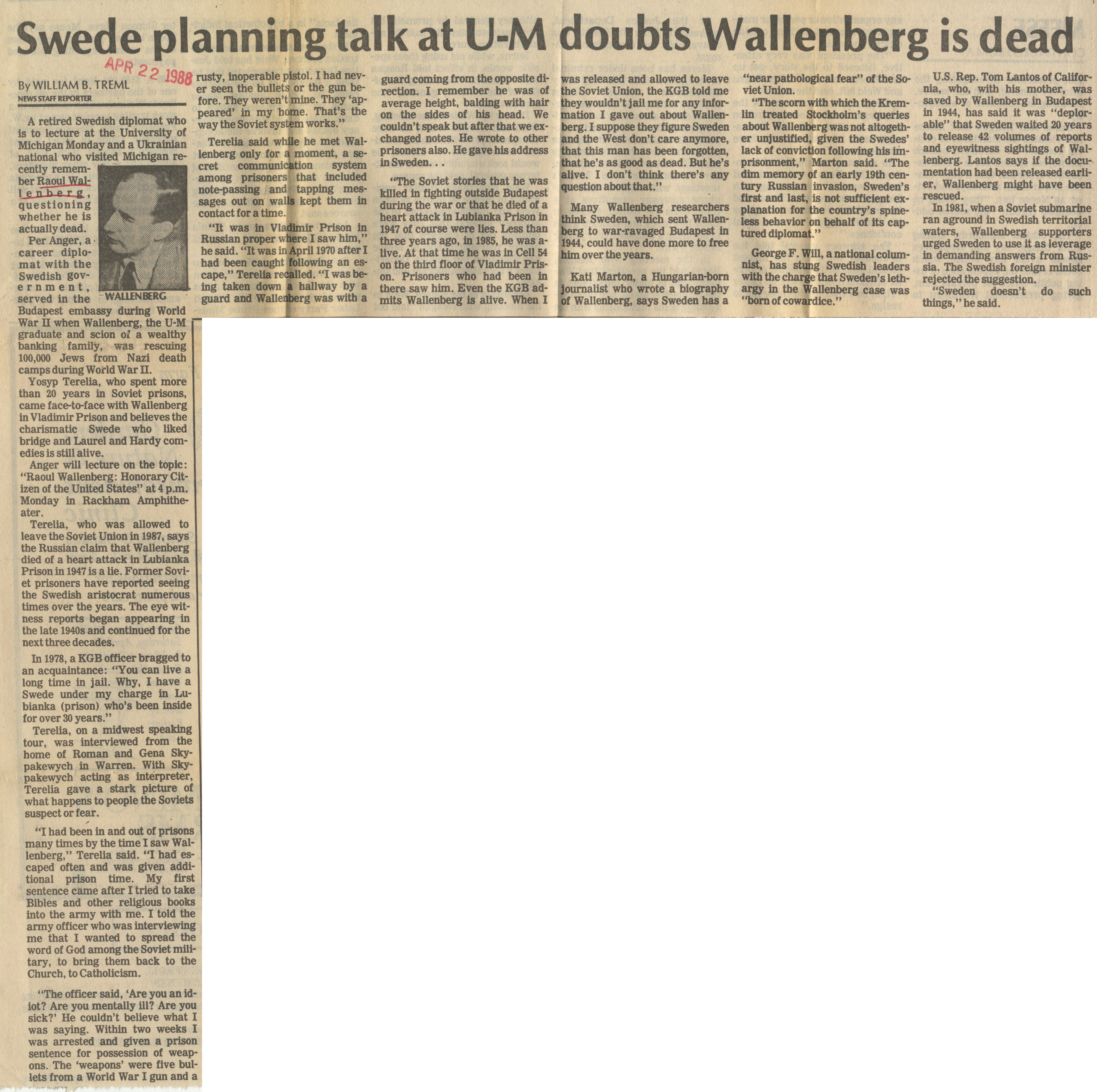 A retired Swedish diplomat who is to lecture at the University of Michigan Monday and a Ukrainian national who visited Michigan recently remember Raoul Wallenberg, questioning whether he is actually dead.

Per Anger, a career diplomat with the Swedish government, served in the Budapest embassy during World War II when Wallenberg, the U-M graduate and scion of a wealthy banking family, was rescuing 100,000 Jews from Nazi death camps during World War II.

Yosyp Terelia, who spent more than 20 years in Soviet prisons, came face-to-face with Wallenberg in Vladimir Prison and believes the charismatic Swede who liked bridge and Laurel and Hardy comedies is still alive.

Anger will lecture on the topic: “Raoul Wallenberg: Honorary Citizen of the United States” at 4 p.m. Monday in Rackham Amphitheater.

Terelia, who was allowed to leave the Soviet Union in 1987, says the Russian claim that Wallenberg died of a heart attack in Lubianka Prison in 1947 is a lie. Former Soviet prisoners have reported seeing the Swedish aristocrat numerous times over the years. The eye witness reports began appearing in the late 1940s and continued for the next three decades.

In 1978, a KGB officer bragged to an acquaintance: “You can live a long time in jail. Why, I have a Swede under my charge in Lubianka (prison) who’s been inside for over 30 years.”

Terelia, on a midwest speaking tour, was interviewed from the home of Roman and Gena Skypakewych in Warren. With Skypakewych acting as interpreter, Terelia gave a stark picture of what happens to people the Soviets suspect or fear.

“I had been in and out of prisons many times by the time I saw Wallenberg,” Terelia said. “I had escaped often and was given additional prison time. My first sentence came after I tried to take Bibles and other religious books into the army with me. I told the army officer who was interviewing me that I wanted to spread the word of God among the Soviet military, to bring them back to the Church, to Catholicism.

“The officer said, ‘Are you an idiot? Are you mentally ill? Are you sick?’ He couldn’t believe what I was saying. Within two weeks I was arrested and given a prison sentence for possession of weapons. The ‘weapons’ were five bullets from a World War I gun and a rusty, inoperable pistol. I had never seen the bullets or gun before. They weren't mine. They 'appeared' in my home. That's the way the Soviet system works."

Terelia said that while he met Wallenberg only for a moment, a secret communication system among prisoners that included note-passing and tapping messages out on walls kept them in contact for a time.

“It was in Vladimir Prison in Russian proper where I saw him,” he said. “It was in April 1970 after I had been caught following an escape,” Terelia recalled. “I was being taken down a hallway by a guard and Wallenberg was with a
guard coming from the opposite direction. I remember he was of average height, balding with hair on the sides of his head. We couldn’t speak but after that we exchanged notes. He wrote to other prisoners also. He gave his address in Sweden...

“The Soviet stories that he was killed in fighting outside Budapest during the war or that he died of a heart attack in Lubianka Prison in 1947 of course were lies. Less than three years ago, in 1985, he was alive. At that time he was in Cell 54 on the third floor of Vladimir Prison. Prisoners who had been in there saw him. Even the KGB admits Wallenberg is alive. When I was released and allowed to leave the Soviet Union, the KGB told me they wouldn’t jail me for any information I gave out about Wallenberg. I suppose they figure Sweden and the West don’t care anymore, that this man has been forgotten, that he’s as good as dead. But he’s alive. I don’t think there’s any question about that.”

Many Wallenberg researchers think Sweden, which sent Wallenberg to war-ravaged Budapest in 1944, could have done more to free him over the years.

Kati Marton, a Hungarian-born journalist who wrote a biography of Wallenberg, says Sweden has a “near pathological fear" of the Soviet Union.

“The scorn with which the Kremlin treated Stockholm’s queries about Wallenberg was not altogether unjustified, given the Swedes’ lack of conviction following his imprisonment,” Marton said. “The dim memory of an early 19th century Russian invasion, Sweden’s first and last, is not sufficient explanation for the country’s spineless behavior on behalf of its captured diplomat.”

George F. Will, a national columnist, has stung Swedish leaders with the charge that Sweden’s lethargy in the Wallenberg case was “born of cowardice.”

U.S. Rep. Tom Lantos of California, who, with his mother, was saved by Wallenberg in Budapest in 1944, has said it was “deplorable” that Sweden waited 20 years to release 42 volumes of reports and eyewitness sightings of Wallenberg. Lantos says if the documentation had been released earlier, Wallenberg might have been rescued.

In 1981, when a Soviet submarine ran aground in Swedish territorial waters, Wallenberg supporters urged Sweden to use it as leverage in demanding answers from Russia. The Swedish foreign minister rejected the suggestion.

“Sweden doesn’t do such things,” he said.