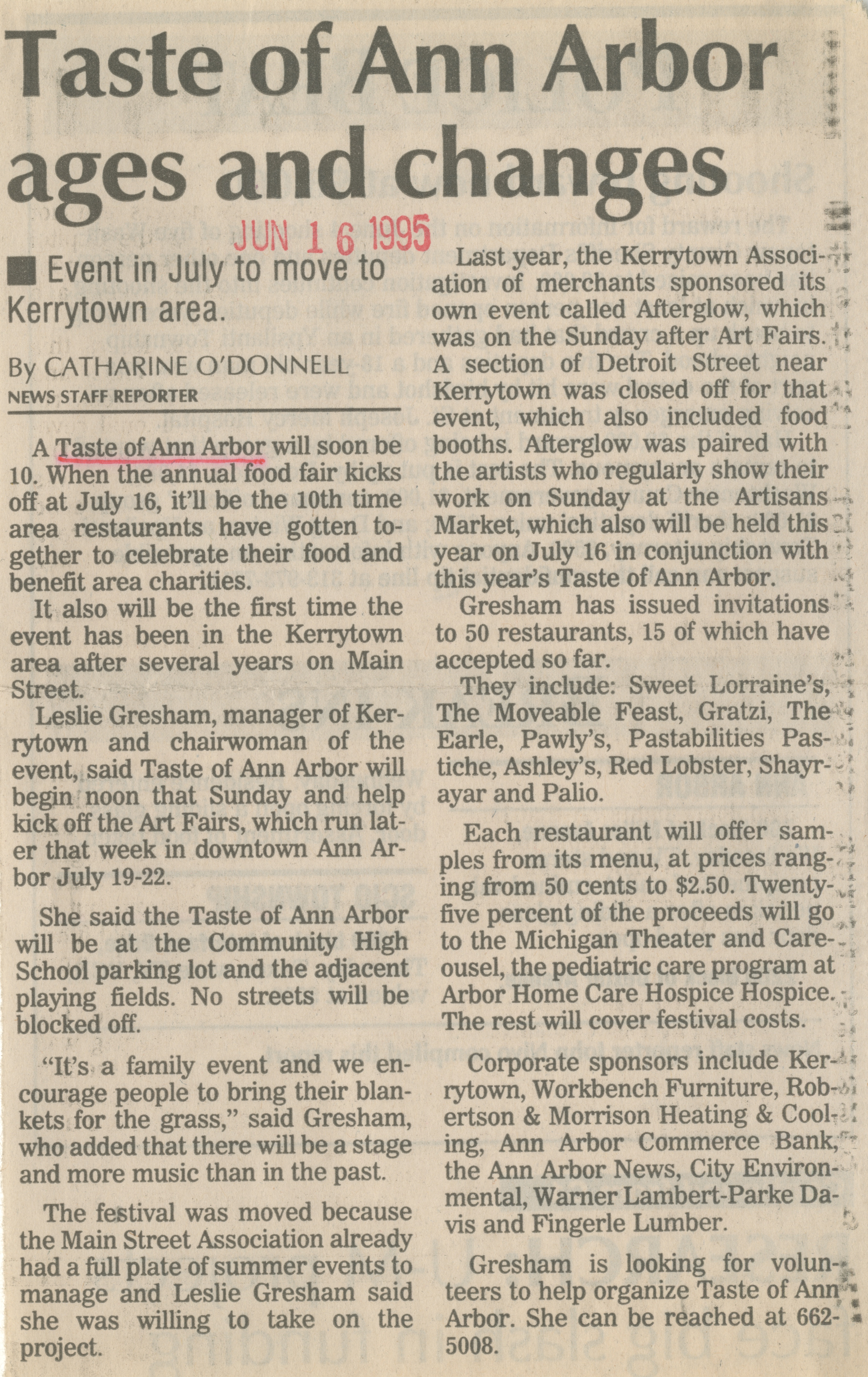 ■ Event in July to move to Kerrytown area.

A Taste of Ann Arbor will soon be 10. When the annual food fair kicks off at July 16, it’ll be the 10th time area restaurants have gotten together to celebrate their food and benefit area charities.

It also will be the first time the event has been in the Kerrytown area after several years on Main Street.

Leslie Gresham, manager of Kerrytown and chairwoman of the event, said Taste of Ann Arbor will begin noon that Sunday and help kick off the Art Fairs, which run later that week in downtown Ann Arbor July 19-22.

She said the Taste of Ann Arbor will be at the Community High School parking lot and the adjacent playing fields. No streets will be blocked off.

“It’s a family event and we encourage people to bring their blankets for the grass,” said Gresham, who added that there will be a stage and more music than in the past.

The festival was moved because the Main Street Association already had a full plate of summer events to manage and Leslie Gresham said she was willing to take on the project.

Last year, the Kerrytown Association of merchants sponsored its own event called Afterglow, which * was on the Sunday after Art Fairs. ' A section of Detroit Street near Kerrytown was closed off for that ; event, which also included food * booths. Afterglow was paired with the artists who regularly show their work on Sunday at the Artisans Market, which also will be held this r year on July 16 in conjunction with this year’s Taste of Ann Arbor.

Gresham has issued invitations to 50 restaurants, 15 of which have accepted so far.

Each restaurant will offer sam- . pies from its menu, at prices rang-ing from 50 cents to $2.50. Twenty- J five percent of the proceeds will go ; to the Michigan Theater and Care-1 ousel, the pediatric care program at Arbor Home Care Hospice Hospice. The rest will cover festival costs.

Gresham is looking for volunteers to help organize Taste of Ann’^ Arbor. She can be reached at 662- • 5008.