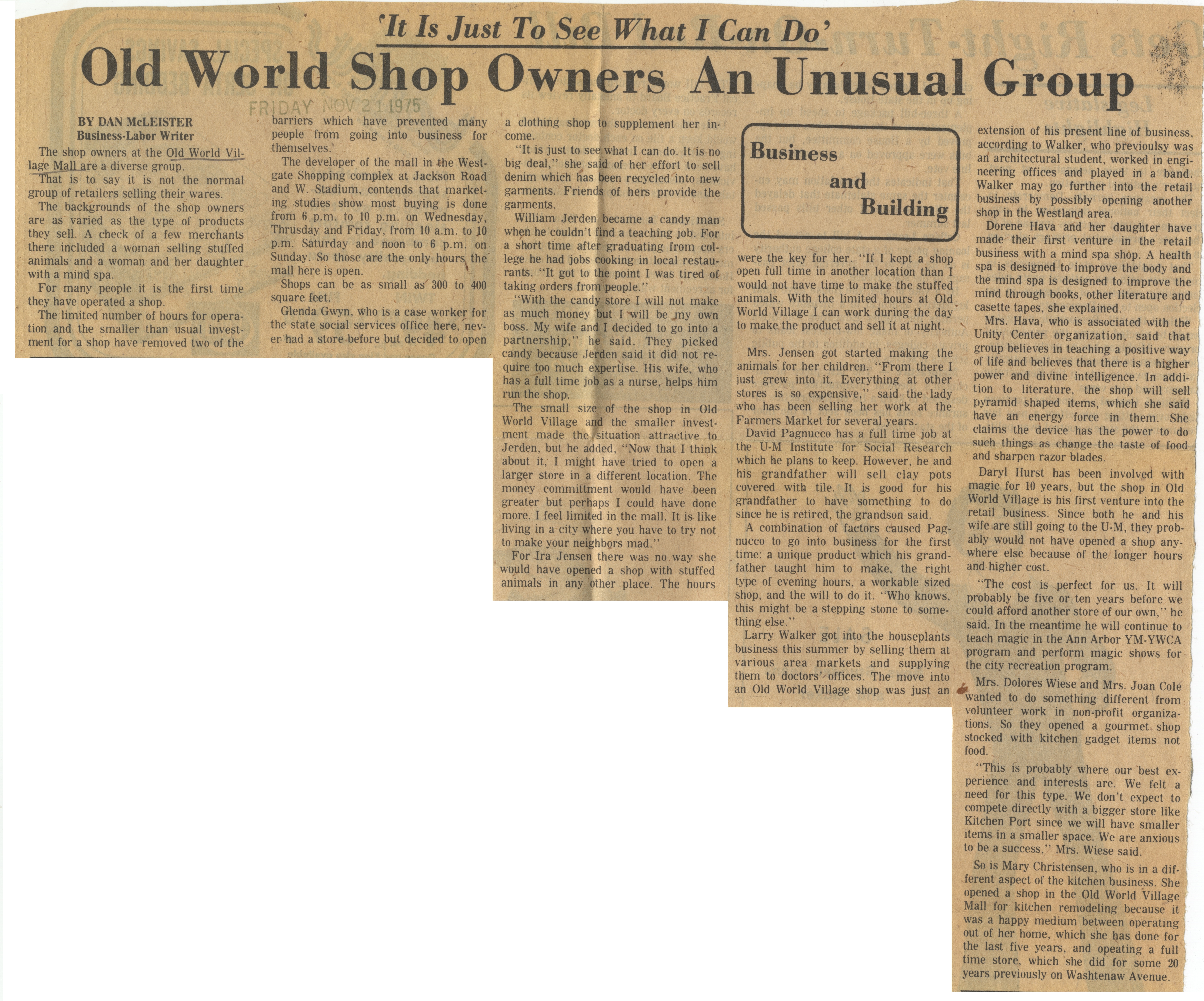 The shop owners at the Old World Vil-
lage Mall are a diver group.
That is to say it is not the normal
group of retailers selling their wares.
The backgrounds of the shop owners
are as varied as the type of products
they sell. A check of a few merchants
there included a woman selling stuffed
animals and a women and her daughter
with a mind spa.
For many people it is the first time
they have operated a shop.

extension of his present line of business.
according to Walker, who previoulsy was
an archiini iiiT-il neer ' played in a band.
W;i!h "ther into the retail
busiiii.,-, „., i,,.,,,.oiy opening another
shop in the Westland area.

For many people il is the first time
they have operated a shop.

a clothing shop to supplement her in-
come.

"It is just to scr what I can do. It is no
big deal," she said of her effort to sell
denim which has been recycled into new
garments. Frienils of hers provide the
garments.

William Jerden became a candy man
when he couldn't find a teaching job. For
a short timi r . mating from col-
lege he had in local restau-
rants. "It g" :» ;i I was tired of
taking orders fp 'n peupie."

The small si.'e of the shop in Old
World Village :.nd the sinaller invest-

Jerden. bu! I think
about it. I ipen a
larger storr : i; 'n. The
money conimittn!'i"il would have been
greater but perhaps I could have done
more, I fed liinitni in the nia!l. It is like
livini ' 'ry not
to m;

Dorene Hava and her daughter have
made their first venture in the retail
business with a mind spa shop. A health
spa is designed to improve the body and
the m'r"i -•"•• - ''"••;gned to improve the
mind i other literature and
cased .plained.

were the key for her. "If I kept a shop
open full time in another location than 1
would not have time to make the stuffed
animals. With the limited hours at Old
World Village I can work during the day
to make the product and sell it at night.

Mrs. Jensen got started making the
animals for her children. "From there I
lust grew into it. Everything at other
stores is so cxpfiisiu'." said the lady
Aho ii work at the
Fan' years.

f»a" 'II lime .job at
the I'-.M [nslitii!" Inr Sucial Research
which he plans to keep. However, he and
his grandfather will sell clay pots
covered with tile. II is good for his
grandfather to have something to do
since he is retired, the grandson said.

A combination of factors caused Pag-
nucco to go into business for the first
lime: a unique product which his grand-
father taught him to make, the right
type of evening hours, a workable sized
shop, and the will to do il. "Who knows.
this might be a stepping stone to some-
thing else "

Larry Walker got into the houseplants
business this summer by selling them at
various area markets and supplying
them to doctors' offices. The move into
an Old World Village .;. • nisi an

Mrs. tiaia. mi" is associated with the
L'llity Center organization, said that
group believes in teaching a positive way
of life and believes that there is a higher
power and divine intelligence. In addi-
tion to literature, the shop will sell
pyramid shaped items, which she said
have an energy force in them. She
claims the device has the power to do

Daryl Hurst has been involved with
magic for 10 years, but the shop in Old
World Village is his first venture into the
mail business Sincr holh he and his
'•i. they prob-

"The cost is perfect for us. It will
probably be five or ten years before we
could afford another store of our own," he
said. In the meantime he will continue to
teach magic in the Ann Arbor YM-YWCA
program and perform magic shows for
the city recreation program.

need fur ili. diin'l expect to
compete directly with ;; like
Kitchen Port since we iller
items in a smaller space ' -iious
to be a success," Mrs. Wiese said.

years previously on Was: