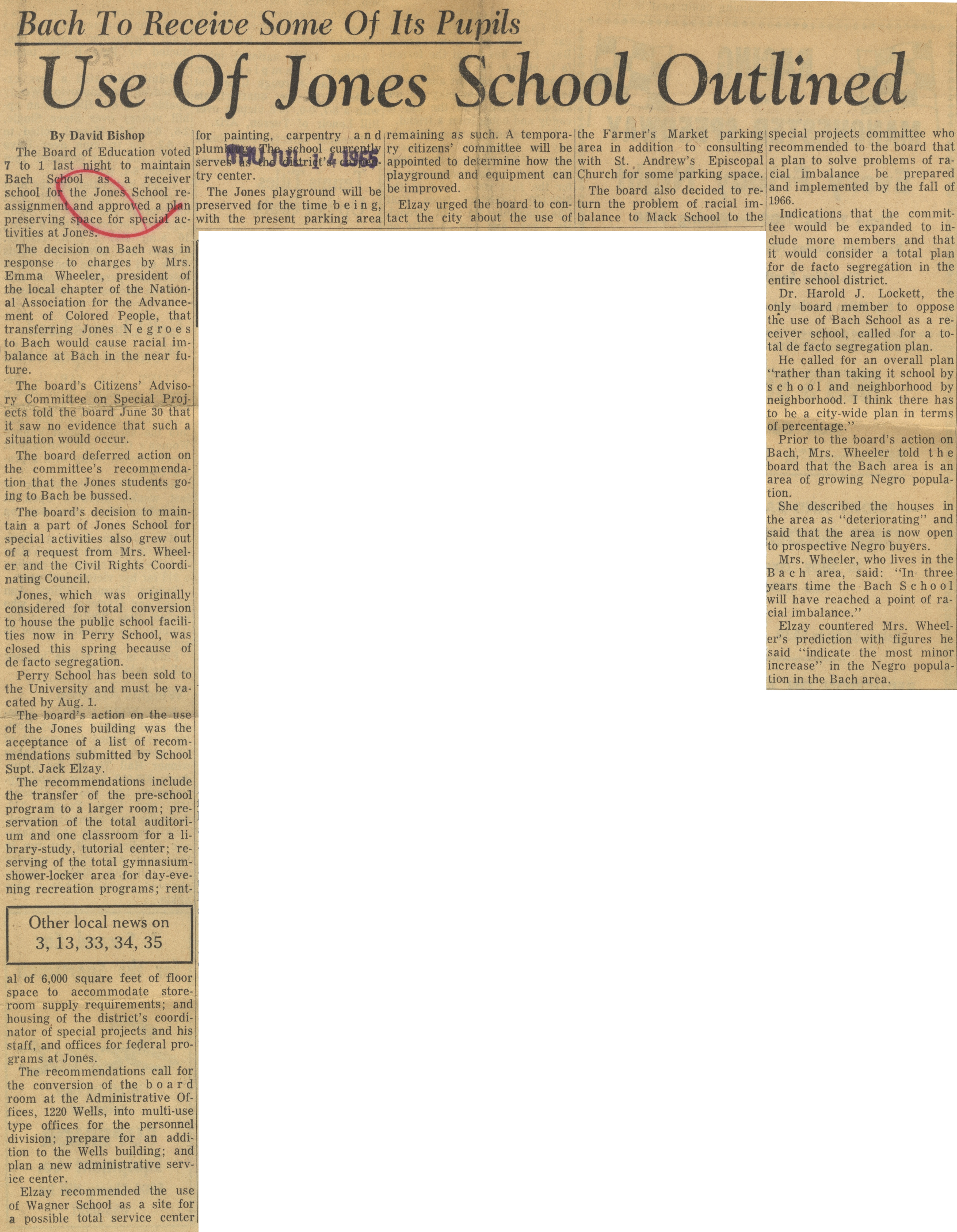 ﻿Bach To Receive Some Of Its Pupils

The decision on Bach was in response to charges by Mrs. Emma Wheeler, president of the local chapter of the National Association for the Advancement of Colored People, that transferring Jones Negroes to Bach would cause racial imbalance at Bach in the near future.

The board’s Citizens’ Advisory Committee on Special Projects told the board June 30 it saw no evidence that such situation would occur.

The board deferred action on the committee’s recommendation that the Jones students going to Bach be bussed.

The board’s decision to maintain a part of Jones School for special activities also grew out of a request from Mrs. Wheeler and the Civil Rights Coordinating Council.

Jones, which was originally considered for total conversion to house the public school facilities now in Perry School, was closed this spring because of de facto segregation.

Perry School has been sold to the University and must be vacated by Aug. 1.

The board’s action on the use of the Jones building was the acceptance of a list of recommendations submitted by School Supt. Jack Elzay.

The recommendations include the transfer of the pre-school program to a larger room; preservation of the total auditorium and one classroom for a library-study, tutorial center; reserving of the total gymnasium-shower-locker area for day-evening recreation programs; rental of 6.000 square feet of floor space to accommodate storeroom supply requirements; and housing of the district’s coordinator of special projects and his staff, and offices for federal programs at Jones.

The recommendations call for the conversion of the board room at the Administrative Offices, 1220 Wells, into multi-use type offices for the personnel division: prepare for an addition to the Wells building; and plan a new administrative service center.

Elzay recommended the use of Wagner School as a site for a possible total service center for painting, carpentry plumping. The school currently serves as the district's carpentry center.

The Jones playground will be preserved for the time being, with the present parking area remaining as such. A temporary citizens’ committee will be appointed to determine how the playground and equipment can be improved.

Elzay urged the board to contact the city about the use of the Farmer’s Market parking area in addition to consulting with St. Andrew's Episcopal Church for some parking space.

Indications that the committee would be expanded to include more members and that it would consider a total plan for de facto segregation in the entire school district.

Dr. Harold J. Lockett, the only board member to oppose the use of Bach School as a receiver school, called for a total de facto segregation plan.

He called for an overall plan “rather than taking it school by school and neighborhood by neighborhood. I think there has to be a city-wide plan in terms of percentage.”

Prior to the board’s action on Bach, Mrs. Wheeler told the board that the Bach area is an area of growing Negro population.

She described the houses in the area as “deteriorating” and said that the area is now open to prospective Negro buyers.

Mrs. Wheeler, who lives in the Bach area, said: “In three years time the Bach School will have reached a point of racial imbalance.”

Elzay countered Mrs. Wheeler’s prediction with figures he said “indicate the most minor increase” in the Negro population in the Bach area.

Other local news on