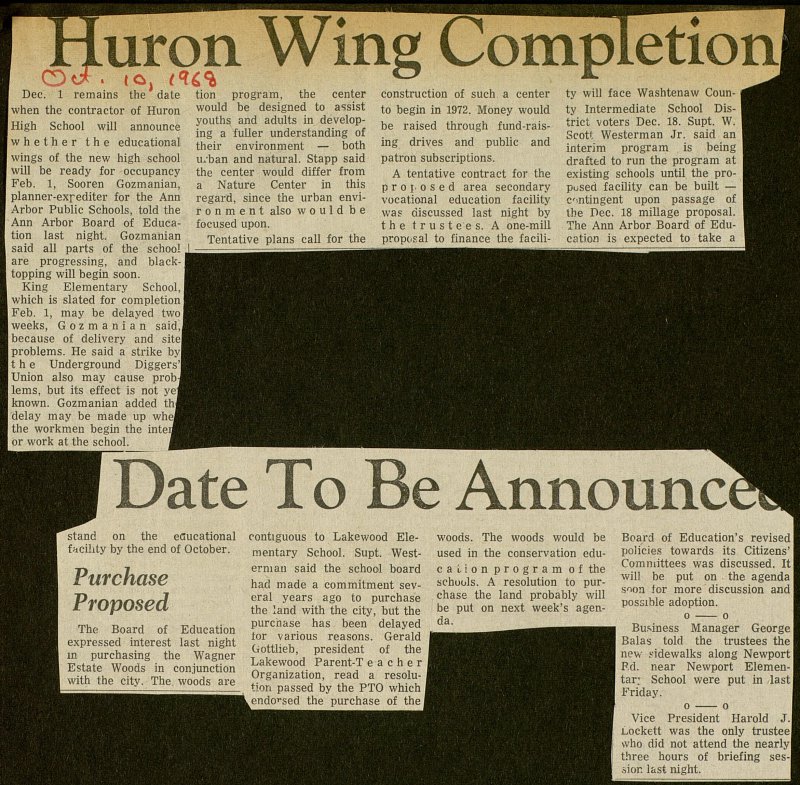 Dec. 1 remains the date when the contractor of Huron High School will announce Iwhether the educational wings of the new high school will be ready for occupancy Feb. 1, Sooren Gozmanian, planner-exrediter for the Ann Arbor Public Schools, told the Ann Arbor Board of Education last night. Gozmanian said all parts of the school are progressing, and blacktopping will begin soon. King Elementary School, which is slated for completion Feb. 1, may be delayed two weeks, Gozmanian saidj because of delivery and sitel problems. He said a strike byl the Underground Diggers'l Union also may cause probJ lems, but its effect is not yei known. Gozmanian added thJ delay may be made up vheM the workmen begin the inleifl or work at the school. fl tion program, the center would be designed to assist youths and adults in developing a fulJer understanding of their environment - both iuban and natural. Stapp said the center would differ from a Nature Center in this regard, since the urban envir o n m e n t also would b e focused upon. Tentative plans cali for the construction of such a center to begin in 1972. Money would be raised through fund-raising drives and public and patrón subscriptions. A tentative contract for the proj.osed area secondary vocational education facility was discussed last night by the trustees. A one-mill proposal to finance the ty wil! face Washtenaw i ty Intermedíate School trict voters Dec. 18. Supt. W. Gcott Westerman Jr. said an interim program is being drafted to run the program at existing schools until the propused facility can be built - cintingent upon passage of the Dec. 18 millage proposal. The Ann Arbor Board of Educaties is expected to take a stand on the eaucational facility by the end of October. Purchase Proposed The Board of Education expressed interest last night in purchasing the Wagner Estáte Woods in conjunction with the city. The woods are contiguous to Lakewood Elementary School. Supt. Westerniau said the school board had made a coramitment several years ago to purchase the land with the city, but the purchase has been delayed tor various reasons. Gerald Gottlieb, president of the Lakewood Parent-T e a c h e r Organization, read a resolution passed by the PTO which kendosed the purchase of thej woods. The woods would be used in the conservation education program of the schools. A resolution to purchase the land probably will be put on next week's agenda. Board of Education's revised policies towards its Citizens' Committees was discussed. It will be put on the agenda soon f er more discussion and possible adoption. o o Business Manager George Balas told the trustees the new sidewalks along Newport P.d. near Newport Elementar; School were put in last Friday. o o Vice President Harold J. Lockett was the only trustee vvho did not attend the nearly three hours of briefing ses-l iion last night.