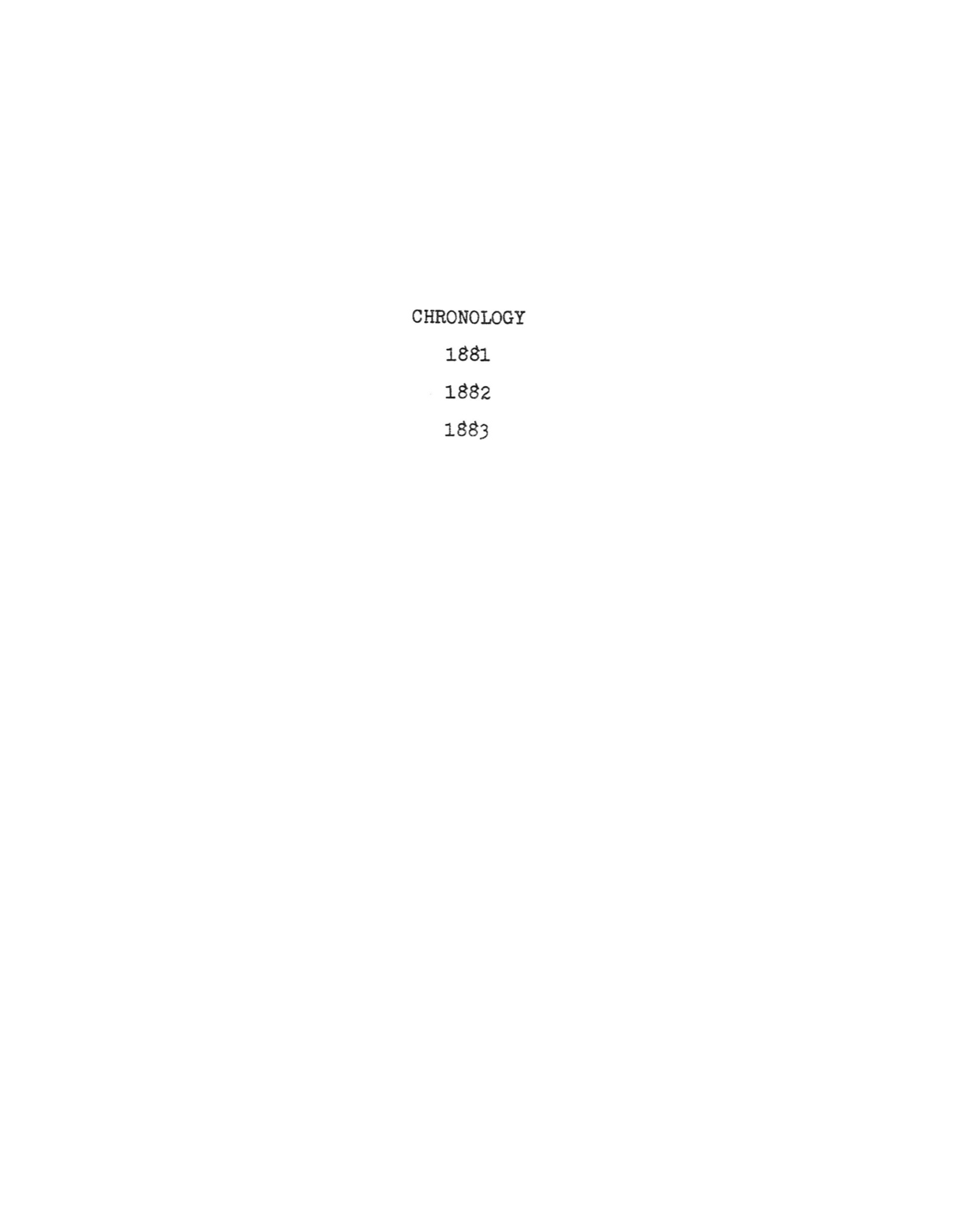 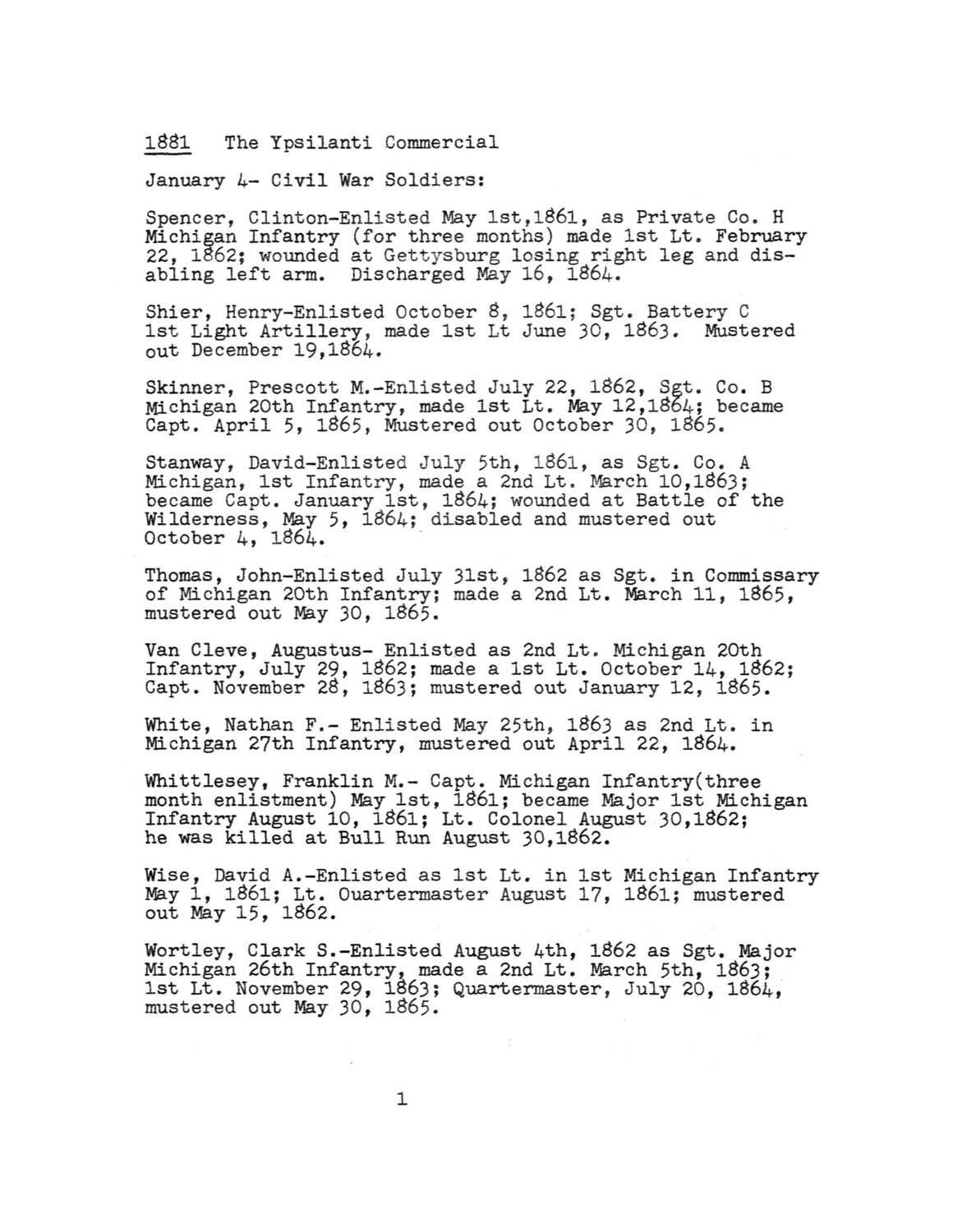 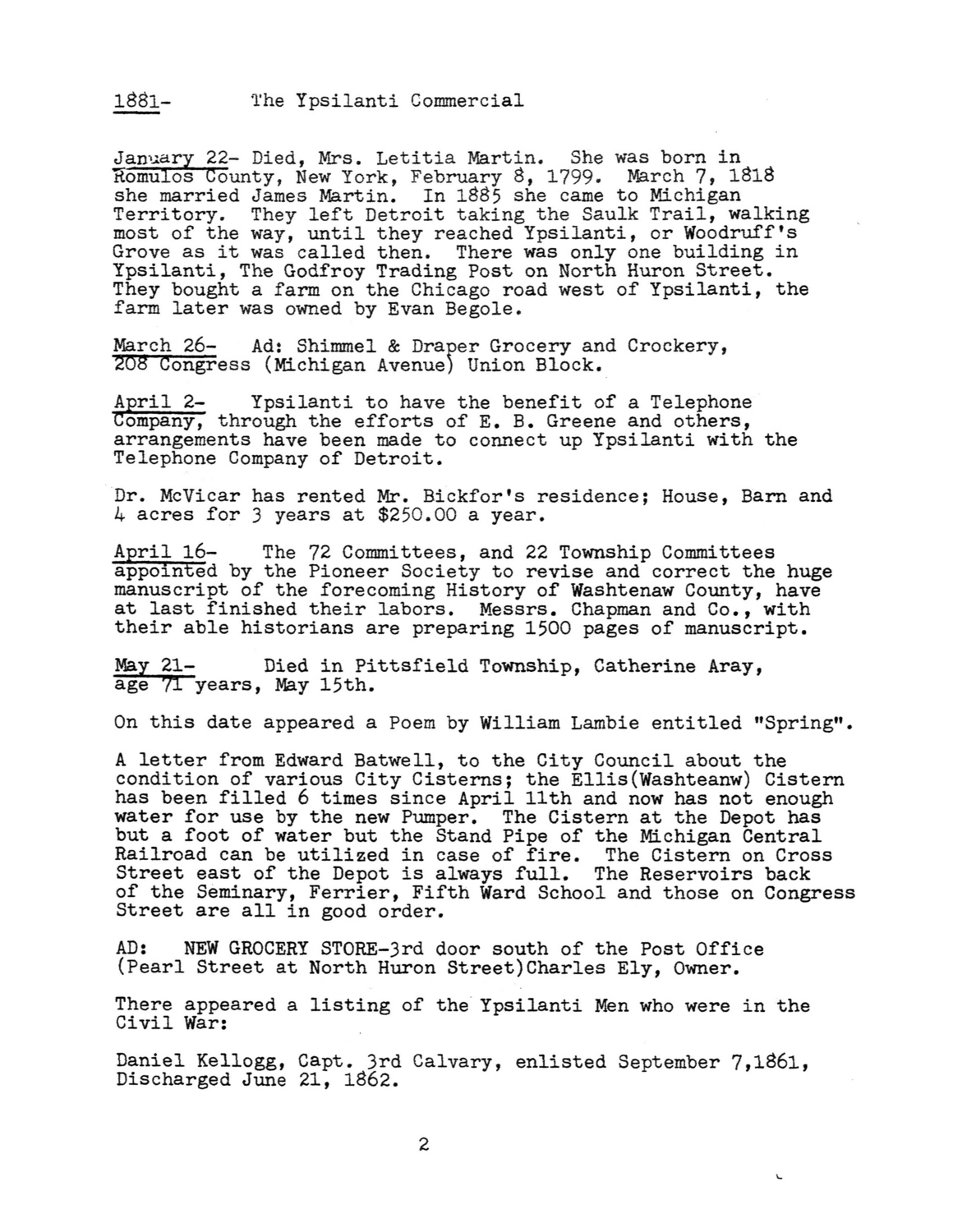 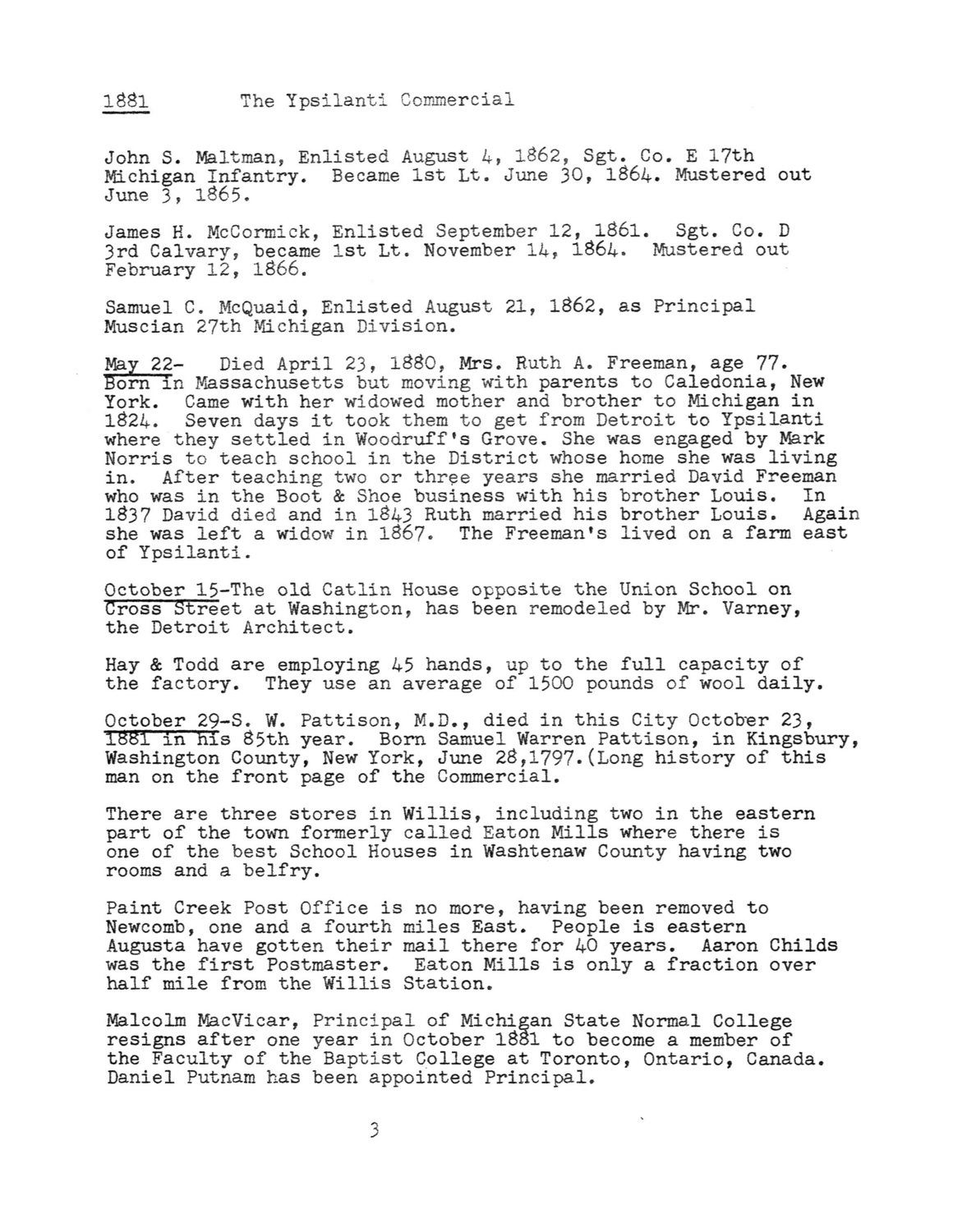 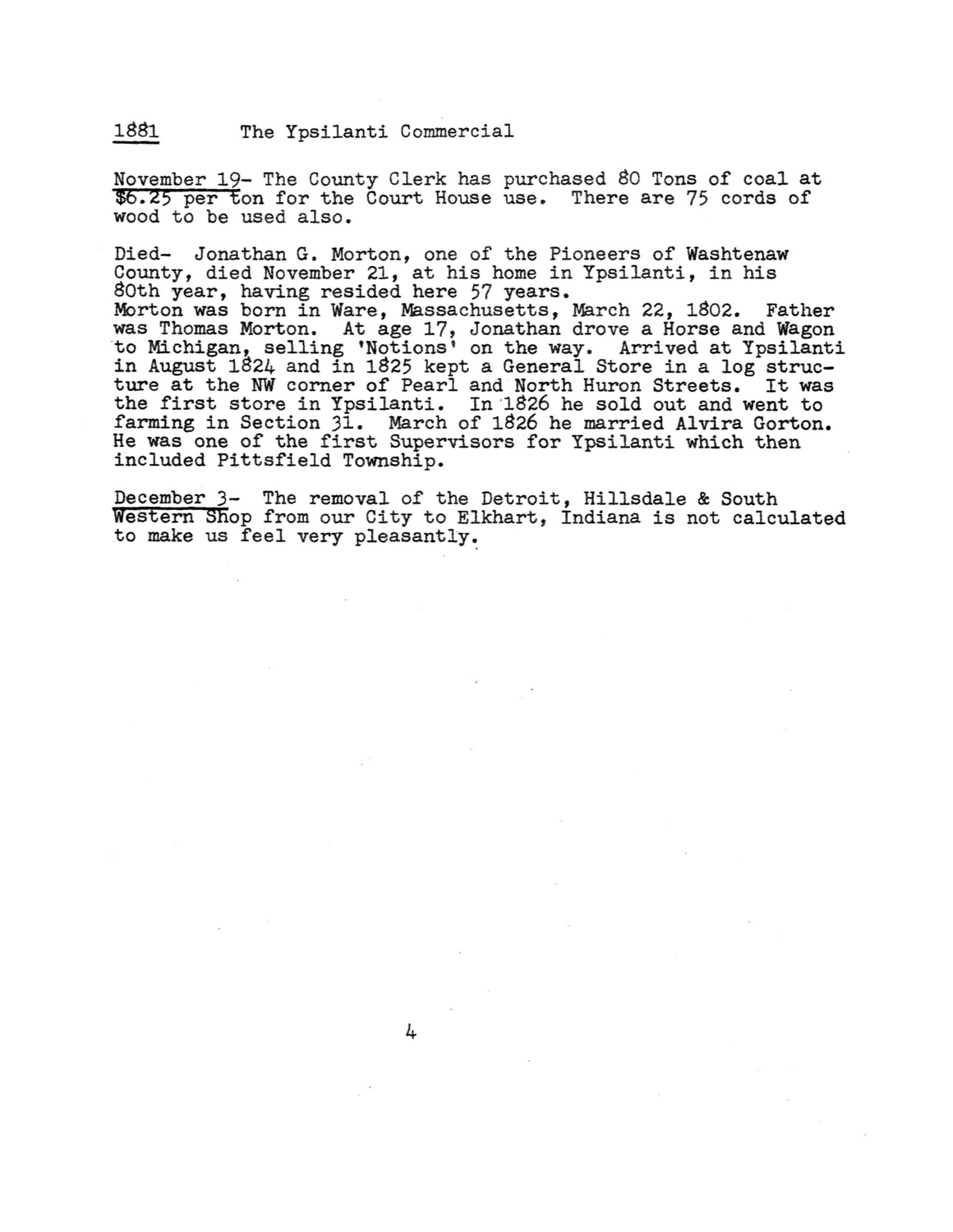 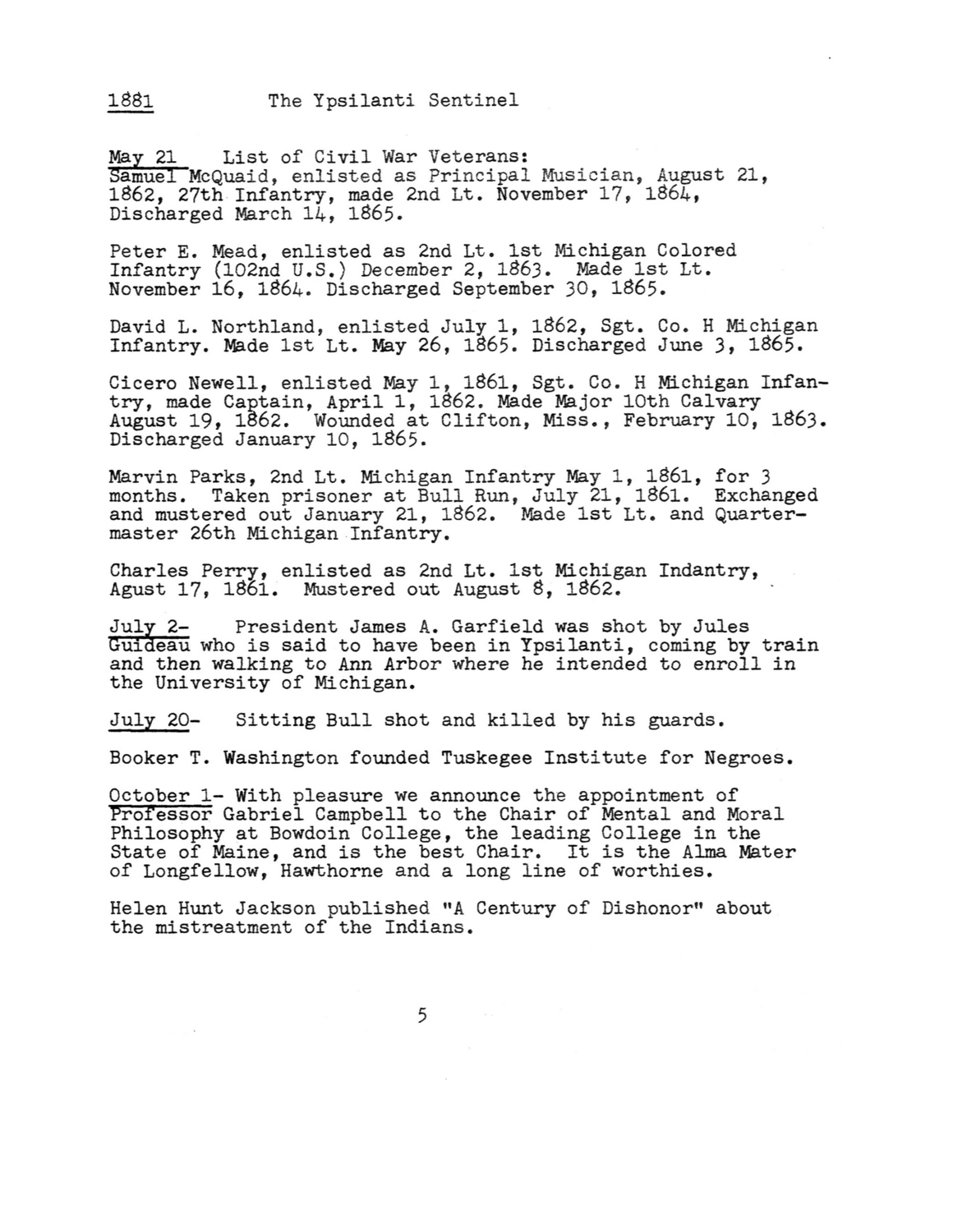 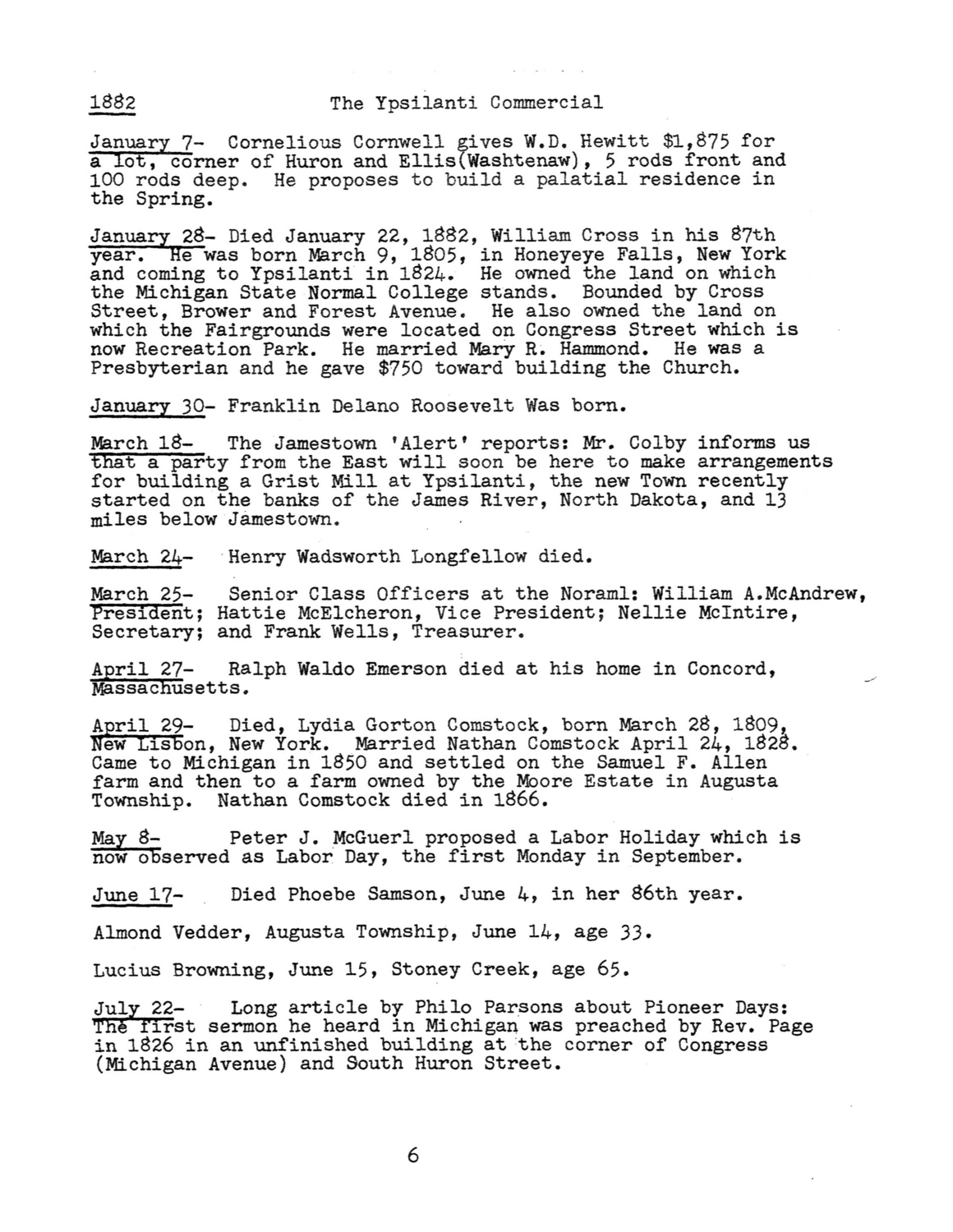 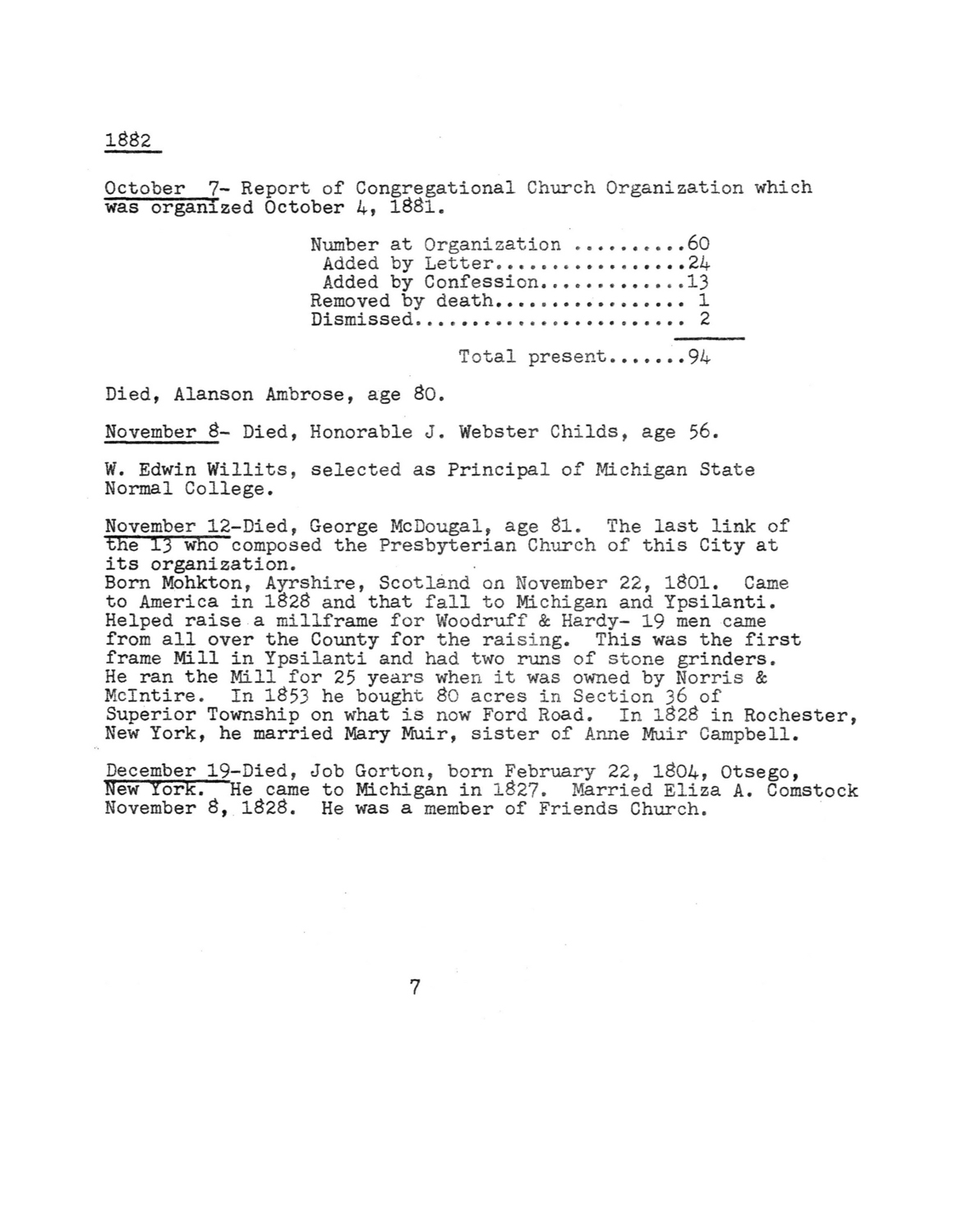 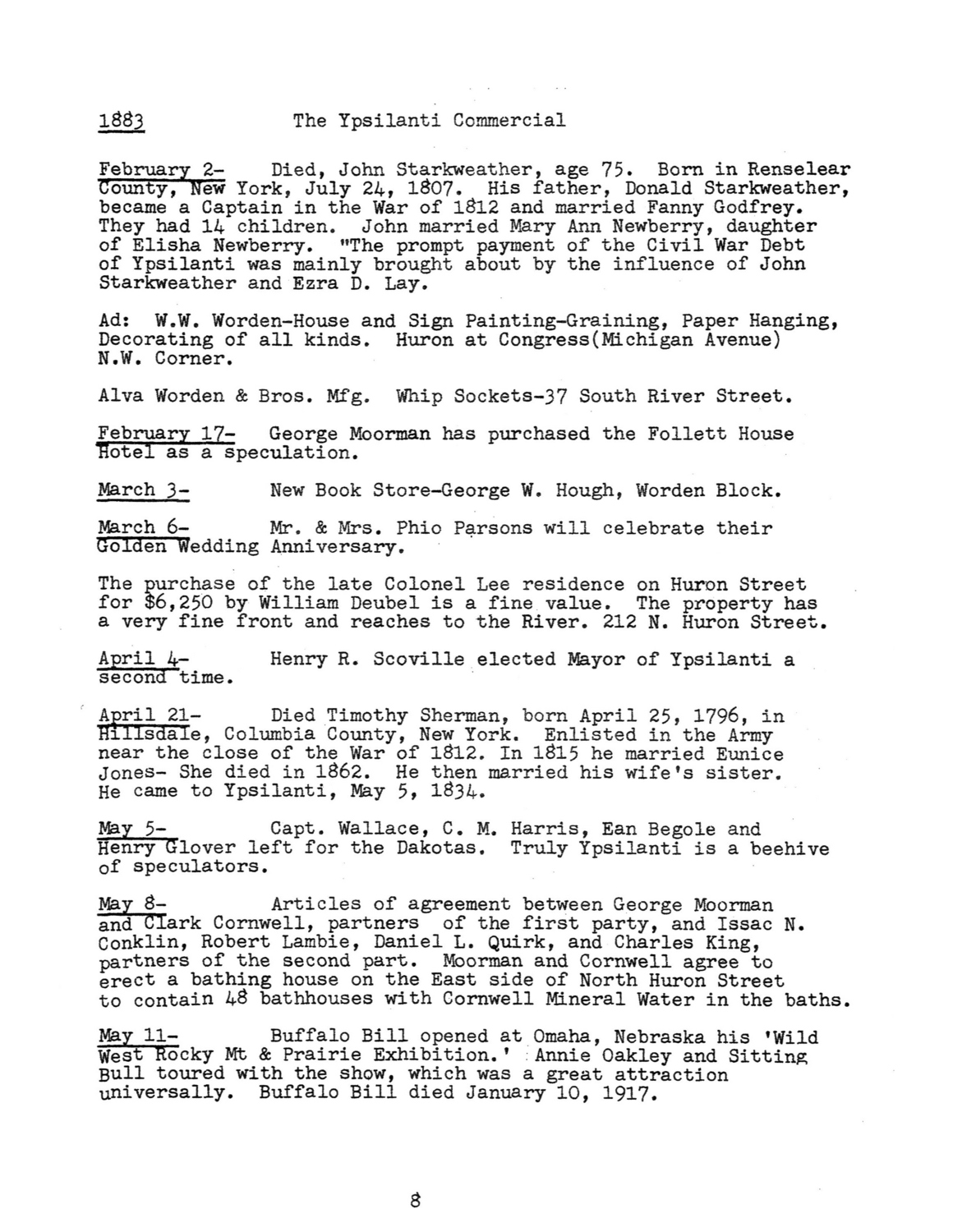 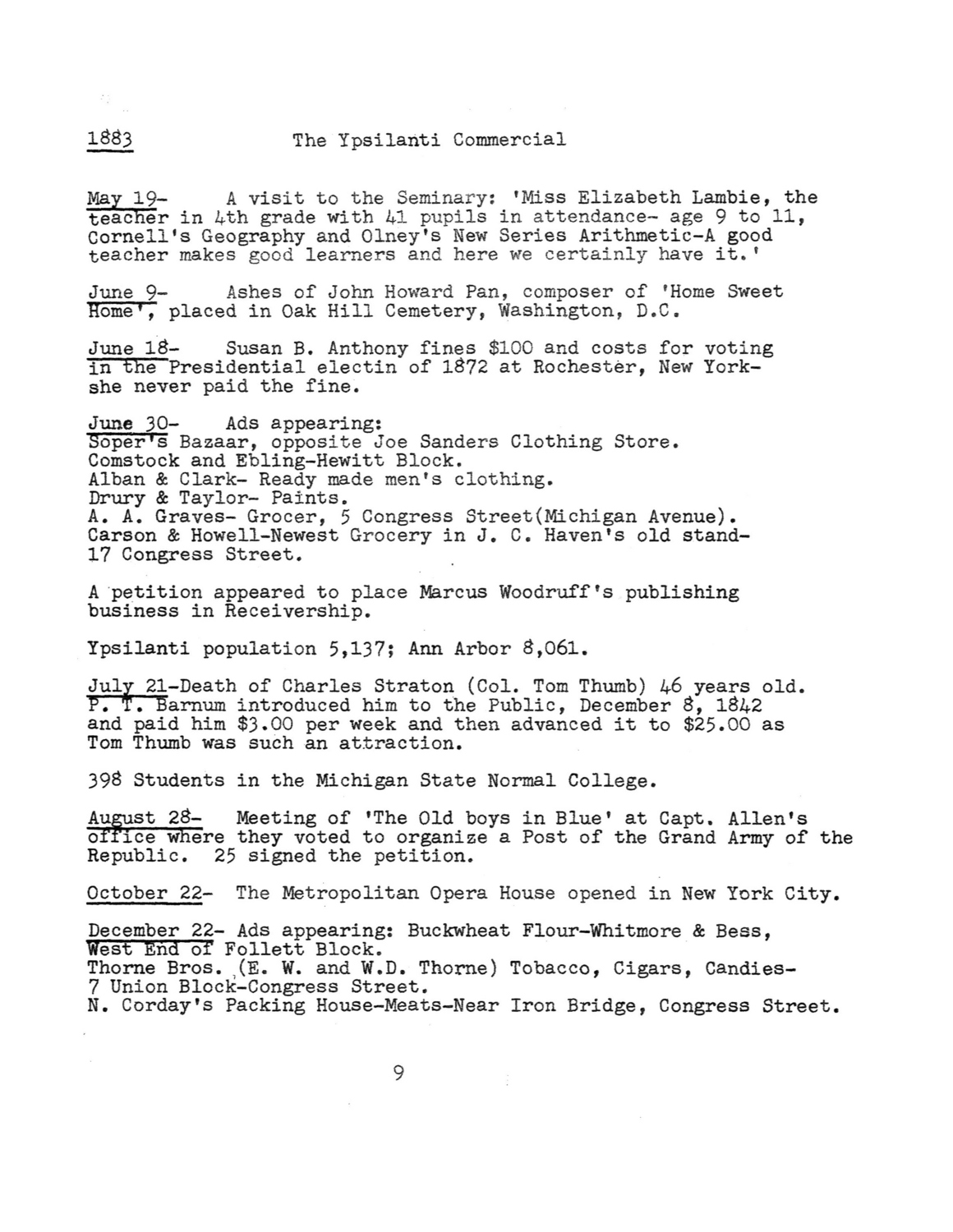 January 22- Died, Mrs. Letitia Martin. She was born in Romulos county, New York, February 8, 1799. March 7, 1818 she married James Martin. In 1885 she she came to Michigan Territory. They left Detroit taking the Saulk Trail, walking most of the way, until they reached Ypsilanti, or Woodruff's Grove as it was called then. There was only one building in Ypsilanti, The Godfroy Trading Post on North Huron Street. They bought a farm on the Chicago road west of Ypsilanti, the farm later was owned by Evan Begole.

April 2- Ypsilanti to have the benefit of a Telephone Company, through the efforts of E. B. Greene and others, arrangements have been made to connect up Ypsilanti with the Telephone Company of Detroit.
Dr. McVicar has rented Mr. Bickfor's residence; House, Barn and 4 acres for 3 years at &dollar;250.00 a year.

April 16- The 72 Committees, and 22 Township Committees appointed by the Pioneer Society to revise and correct the huge manuscript of the forecoming History of Washtenaw County, have at last finished their labors. Messrs. Chapman and Co., with their able historians are preparing 1500 pages of manuscript.

May 21- Died in Pittsfield Township, Catherine Aray, age 71 years, may 15th.
On this date appeared a Poem by William Lambie entitled “Spring”.
A letter from Edward Batwell, to the City council about the condition of variou City Cisterns; the Ellis (Washteanw) Cistern has been filled 6 times since April 11th and now has not enough water for use by the new Pumper. The Cistern at the Depot has but a foot of water but the Stand Pipe of the Michigan Central Railroad can be utilized in case of fire. The Cistern on Cross Street east of the Depot is always full. The Reservoirs back of the Seminary, Ferrier, Fifth Ward School and those on Congress Street are all in good order.
AD: NEW GROCERY STORE-3rd door south of the Post Office (Pearl Street at North Huron Street) Charles Ely, Owner.
There appeared a listing of the Ypsilanti Men who were in the Civil War:
Daniel Kellogg, Capt. 3rd Calvary, enlisted September 7, 1861, Discharged June 21, 1862.

May 22- Died April 23, 1880, Mrs. Ruth A. Freeman, age 77. Born in Massachusetts but moving with parents to Caledonia, New York. Came with her widowed mother and brother to Michigan in 1824. Seven days it took them to get from Detroit to Ypsilanti where they settled in Woodruff's Grove. She was engaged by Mark Norris to teach school in the District whose home she was living in. After teaching two or three years she married David Freeman who was in the boot & shoe business with his brother Louis. In 1837 David died and in 1843 Ruth married his brother Louis. Again she was left a widow in 1867. The freeman's lived on a farm east of Ypsilanti.

October 15-The old Catlin House opposite the Union School on Cross Street at Washington, has been remodeled by Mr. Varney, the Detroit Architect.
Hay & Todd are employing 45 hands, up to the full capacity of the factory. They use an average of 1500 pounds of wool daily.

October 29-S. W. Pattison, M.D., died in this City October 23, 1881 in his 85th year. Born Samuel Warren Pattison, in Kingsbury, Washington County, New York, June 28, 1797. (Long history of this man on the front page of the Commercial.
There are three stores in Willis, including two in teh eastern part of the town formerly called Eaton Mills where there is one of the best School Houses in Washtenaw County having two rooms and a belfey.
Paint Creek Post Office is no more, having been remove to Newcomb, one and a fourth miles East. People is eastern Augusta have gotten their mail there for 40 years. Aaron Childs was the first Postmaster. Eaton Mills is only a fraction over half mile from the Willis Station.
Malcolm MacVicar, Principal of Michigan State Normal College resigns after one year in October 1881 to become a member of the Faculty of the Baptist college at Toronto, Ontario, Canada. Daniel Putnam has been appointed Principal.

November 19- The County Clerk has purchased 80 Tons of coal at &dollar;6.25 per ton fo the Court House use. There are 75 cords of wood to be used also.
Died-Jonathan G. Morton, oen of the Pioneers of Washtenaw County, died November 21, at his home in Ypsilanti, in his 80th year, having resided here 57 years.
Morton was born in ware, Massachusetts, March 22, 1802. Father was Thomas Morton. At age 17, Jonathan drove a Horse and Wagon to Michigan, selling ‘Notions’ on the way. Arrived at Ypsilanti in August 1824 and in 1825 kept a General tore in a log structure at the NW corner of Pearl and North Huron Streets. It was the First store in Ypsilanti. In 1826 he married Alvira Gorton. He was one of the first Supervisors for Ypsilanti which then included Pittsfield Township.

December 3- The removal of the Detroit, Hillsdale & South Western Shop from our City to Elkhart, Indiana is not calculated to make us feel very pleasantly.

July 2- President James A. Garfield was shot by Jules Guideau who is said to have been in Ypsilanti, coming by train and then walking to Ann Arbor where he intended to enroll in the University of Michigan.

October 1- With pleasure we announce the appointment of Professor Gabriel Campbell to the Chair of Mental and Moral Philosophy at Bowdoin College, the leading College in the State of Maine, and is the best Chair. It is the Alma Mater of Longfellow, Hawthorne and along line of worthies.
Helen Hunt Jackson published “A Century of Dishonor” about the mistreatment of the Indians.

January 7- Cornelious Cornwell gives W. D. Hewitt &dollar;1,875 for a lot, corner of Huron and Ellis (Washtenaw), 5 rods front and 100 rods deep. He proposes to build a palatial residence in the Spring.

January 28- Died January 22, 1882, William Cross in his 87th year. He was born March 9, 1805, in Honeyeye Falls, New York and coming to Ypsilanti in 1824. He owned the land on which the Michigan State Normal College stands. Bounded by Cross Street, Brower and Forest Avenue. He also owned the land on which the Fairgrounds were located on Congress Street which is now Recreation Park. He married Mary R. Hammond. He was a Presbyterian and he gave &dollar;750 toward building the Church.

March 18- The Jamestown ‘Alert’ reports: Mr. Colby informs us that a party from the East will soon be here to make arrangements for building a Grist Mill at Ypsilanti, the new Town recently started on the banks of the James River, North Dakota, and 13 miles below Jamestown.

May 8- Peter J. McGuerl proposed a Labor Holiday which is now observed as Labor Day, the first Monday in September.

July 22- Long article by Philo Parsons about Pioneer Days: The first sermon he heard in Michigan was preached by Rev. Page in 1826 in an unfinished building at the corner of Congress (Michigan Avenue) and South Huron Street.

October 7- Report of Congregational Church Organization which was organized October 4, 1881.

November 12- Died, George McDougal, age 81. The last link of the 13 who composed the Presbyterian Church of this City at its organization.
Born Mohkton, Ayrshire, Scotland on November 22, 1801. Came to America in 1828 and that fall to Michigan and Ypsilanti. Helped raise a millframe for Woodruff & Hardy-19 men came from all over the County for the raising. This was the first frame Mill in Ypsilanti and had two runs of stone grinders. He ran the Mill for 25 years when it was owned by Norris & McIntire. In 1853 he bought 80 acres in Section 36 of Superior Township on what is now Ford Road. In 1828 in Rochester, New York, he married Mary Muir, sister of Anne Muir Campbell.

February 17- George Moorman has purchased the Follett House Hotel as a speculation.

March 6- Mr. & Mrs. Phio Parsons will celebrate their Golden Wedding Anniversary.
The purchase of the late Colonel Lee residence on Huron Street for &dollar;6,250 by William Deubel is a fine value. The property has a very fine front and reaches to the River. 212 N. Huron Street.

May 5- Capt. Wallace, C. M. Harris, Ean Begole and Henry Glover left for the Dakotas. Truly Ypsilanti is a beehive of speculators.

May 8- Articles of agreement between George Moorman and Clark Cornwell, partners of the first party, and Issac N. Conklin, Robert Lambie, Daniel L. Quirk, and Charles King, partners of the second part. Moorman and Cornwell agree to erect a bathing house on the East side of North Huron Street to contain 48 bathhouses with Cornwell Mineral Water in the baths.

May 19- A visit to the Seminary: ‘Miss Elizabeth Lambie, the teacher in 4th grade with 41 pupils in attendance-age 9 to 11, Cornell's Geography and Olney's New Series Arithmetic-A good teacher makes good learners and here we certainly have it.’

June 18- Susan B. Anthony fines &dollar;100 and costs for voting in the Presidential election of 1872 at Rochester, New York-she never paid the fine.

July 21- Death of Charles Straton (Col. Tom Thumb) 46 years old. P. T. Barnum introduced him to the Public, December 8, 1842 and paid him &dollar;3.00 per week and then advanced it to &dollar;25.00 as Tom Thumb was such an attraction.
398 Students in the Michigan State Normal College.

August 28- Meeting of ‘The Old boys in Blue' at Capt. Allen's office where they voted to organize a Post of the Grand Army of the Republic. 25 signed the petition.