My Memories as an Ypsi Press Carrier During the Early 50s 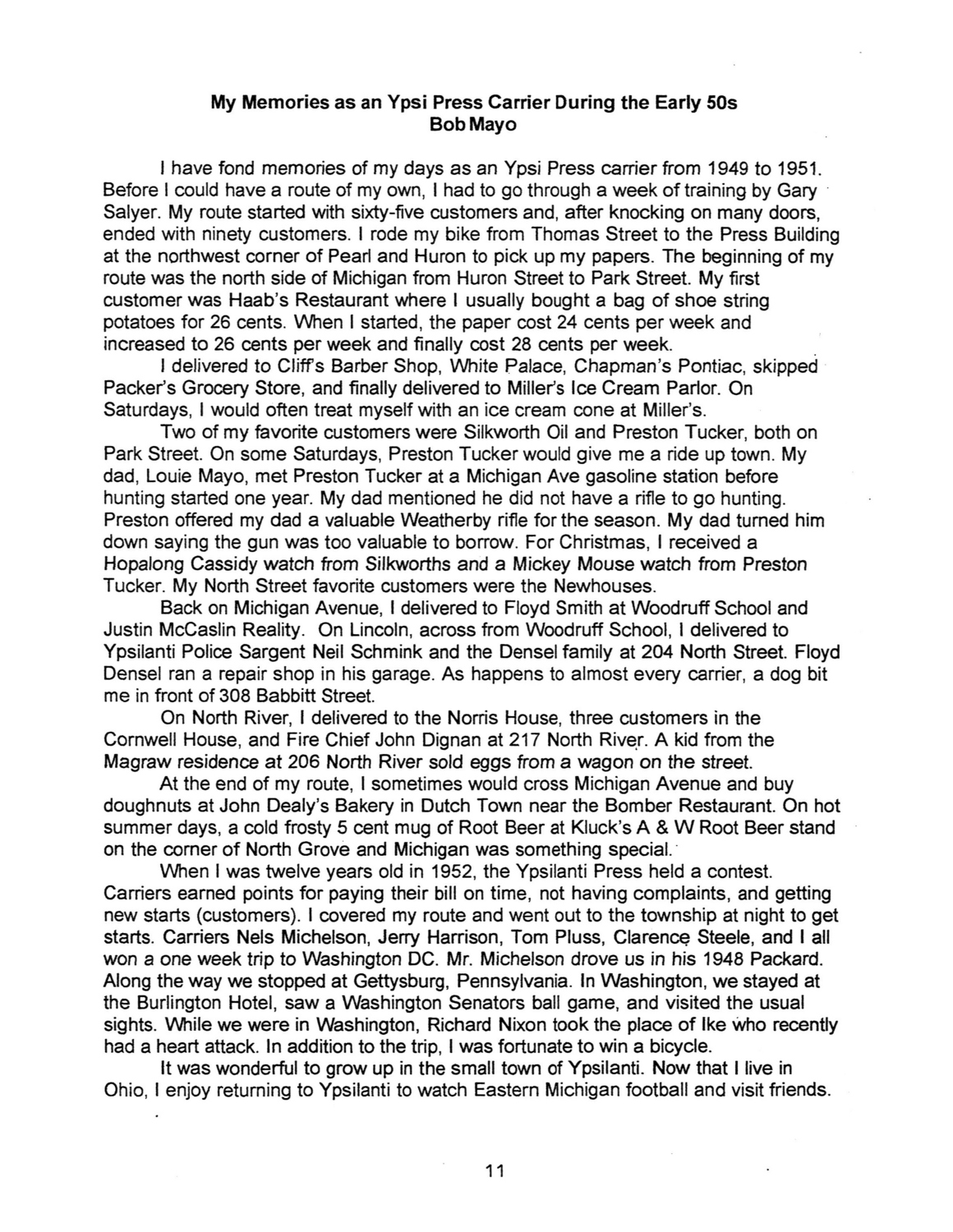 I have fond memories of my days as an Ypsi Press carrier from 1949 to 1951. Before I could have a route of my own, I had to go through a week of training by Gary Salyer. My route started with sixty-five customers and, after knocking on many doors, ended with ninety customers. I rode my bike from Thomas Street to the Press Building at the northwest corner of Pearl and Huron to pick up my papers. The beginning of my route was the north side of Michigan from Huron Street to Park Street. My first customer was Haab's Restaurant where I usually bought a bag of shoe string potatoes for 26 cents. When I started, the paper cost 24 cents per week and increased to 26 cents per week and finally cost 28 cents per week.

I delivered to Cliffs Barber Shop, White Palace, Chapman's Pontiac, skipped Packer's Grocery Store, and finally delivered to Miller's Ice Cream Parlor. On Saturdays, I would often treat myself with an ice cream cone at Miller's.

Two of my favorite customers were Silkworth Oil and Preston Tucker, both on Park Street. On some Saturdays, Preston Tucker would give me a ride up town. My dad, Louie Mayo, met Preston Tucker at a Michigan Ave gasoline station before hunting started one year. My dad mentioned he did not have a rifle to go hunting. Preston offered my dad a valuable Weatherby rifle for the season. My dad turned him down saying the gun was too valuable to borrow. For Christmas, I received a Hopalong Cassidy watch from Silkworths and a Mickey Mouse watch from Preston Tucker. My North Street favorite customers were the Newhouses.

Back on Michigan Avenue, I delivered to Floyd Smith at Woodruff School and Justin McCaslin Reality. On Lincoln, across from Woodruff School, I delivered to Ypsilanti Police Sargent Neil Schmink and the Densel family at 204 North Street. Floyd Densel ran a repair shop in his garage. As happens to almost every carrier, a dog bit me in front of 308 Babbitt Street.

On North River, I delivered to the Norris House, three customers in the Cornwell House, and Fire Chief John Dignan at 217 North River. A kid from the Magraw residence at 206 North River sold eggs from a wagon on the street.

At the end of my route, I sometimes would cross Michigan Avenue and buy doughnuts at John Dealy's Bakery in Dutch Town near the Bomber Restaurant. On hot summer days, a cold frosty 5 cent mug of Root Beer at Kluck's A & W Root Beer stand on the corner of North Grove and Michigan was something special.

When I was twelve years old in 1952, the Ypsilanti Press held a contest. Carriers earned points for paying their bill on time, not having complaints, and getting new starts (customers). I covered my route and went out to the township at night to get starts. Carriers Nels Michelson, Jerry Harrison, Tom Pluss, Clarence Steele, and I all won a one week trip to Washington DC. Mr. Michelson drove us in his 1948 Packard. Along the way we stopped at Gettysburg, Pennsylvania. In Washington, we stayed at the Burlington Hotel, saw a Washington Senators ball game, and visited the usual sights. While we were in Washington, Richard Nixon took the place of Ike who recently had a heart attack. In addition to the trip, I was fortunate to win a bicycle.

It was wonderful to grow up in the small town of Ypsilanti. Now that I live in Ohio, I enjoy returning to Ypsilanti to watch Eastern Michigan football and visit friends.