Death at the Depot 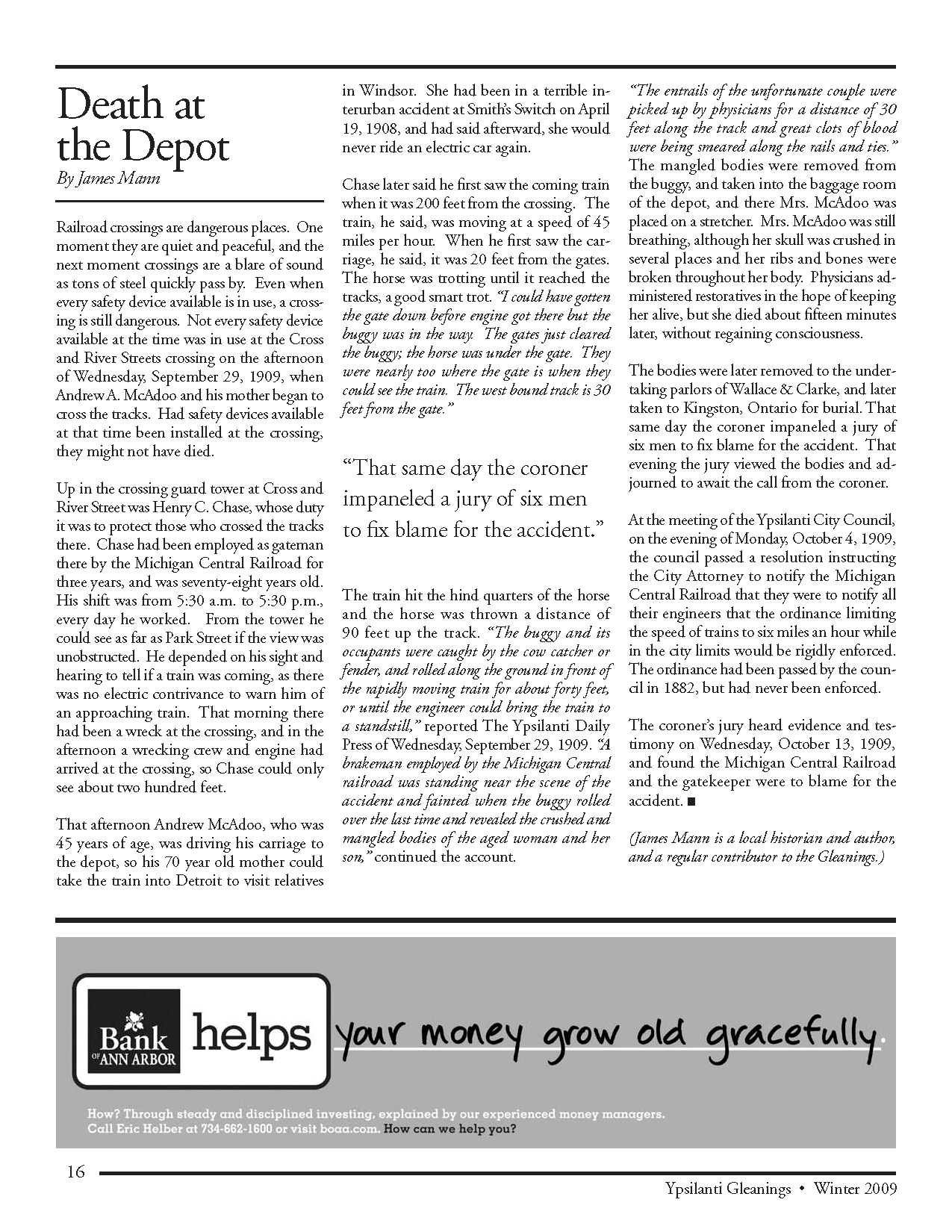 Railroad crossings are dangerous places. One moment they are quiet and peaceful, and the next moment crossings are a blare of sound as tons of steel quickly pass by. Even when every safety device available is in use, a crossing is still dangerous. Not every safety device available at the time was in use at the Cross and River Streets crossing on the afternoon of Wednesday, September 29, 1909, when Andrew A. McAdoo and his mother began to cross the tracks. Had safety devices available at that time been installed at the crossing, they might not have died.

Up in the crossing guard tower at Cross and River Street was Henry C. Chase, whose duty it was to protect those who crossed the tracks there. Chase had been employed as gateman there by the Michigan Central Railroad for three years, and was seventy-eight years old. His shift was from 5:30 a.m. to 5:30 p.m., every day he worked. From the tower he could see as far as Park Street if the view was unobstructed. He depended on his sight and hearing to tell if a train was coming, as there was no electric contrivance to warn him of an approaching train. That morning there had been a wreck at the crossing, and in the afternoon a wrecking crew and engine had arrived at the crossing, so Chase could only see about two hundred feet.

That afternoon Andrew McAdoo, who was 45 years of age, was driving his carriage to the depot, so his 70 year old mother could take the train into Detroit to visit relatives in Windsor. She had been in a terrible interurban accident at Smith’s Switch on April 19, 1908, and had said afterward, she would never ride an electric car again.

Chase later said he first saw the coming train when it was 200 feet from the crossing. The train, he said, was moving at a speed of 45 miles per hour. When he first saw the carriage, he said, it was 20 feet from the gates. The horse was trotting until it reached the tracks, a good smart trot. “I could have gotten the gate down before engine got there but the buggy was in the way. The gates just cleared the buggy; the horse was under the gate. They were nearly too where the gate is when they could see the train. The west bound track is 30 feet from the gate.”

The train hit the hind quarters of the horse and the horse was thrown a distance of 90 feet up the track. “The buggy and its occupants were caught by the cow catcher or fender, and rolled along the ground in front of the rapidly moving train for about forty feet, or until the engineer could bring the train to a standstill,” reported The Ypsilanti Daily Press of Wednesday, September 29, 1909. “A brakeman employed by the Michigan Central railroad was standing near the scene of the accident and fainted when the buggy rolled over the last time and revealed the crushed and mangled bodies of the aged woman and her son,” continued the account.

“The entrails of the unfortunate couple were picked up by physicians for a distance of 30 feet along the track and great clots of blood were being smeared along the rails and ties.” The mangled bodies were removed from the buggy, and taken into the baggage room of the depot, and there Mrs. McAdoo was placed on a stretcher. Mrs. McAdoo was still breathing, although her skull was crushed in several places and her ribs and bones were broken throughout her body. Physicians administered restoratives in the hope of keeping her alive, but she died about fifteen minutes later, without regaining consciousness.

The bodies were later removed to the undertaking parlors of Wallace & Clarke, and later taken to Kingston, Ontario for burial. That same day the coroner impaneled a jury of six men to fix blame for the accident. That evening the jury viewed the bodies and adjourned to await the call from the coroner.

At the meeting of the Ypsilanti City Council, on the evening of Monday, October 4, 1909, the council passed a resolution instructing the City Attorney to notify the Michigan Central Railroad that they were to notify all their engineers that the ordinance limiting the speed of trains to six miles an hour while in the city limits would be rigidly enforced. The ordinance had been passed by the council in 1882, but had never been enforced.

The coroner’s jury heard evidence and testimony on Wednesday, October 13, 1909, and found the Michigan Central Railroad and the gatekeeper were to blame for the accident.

(James Mann is a local historian and author, and a regular contributor to the Gleanings.)