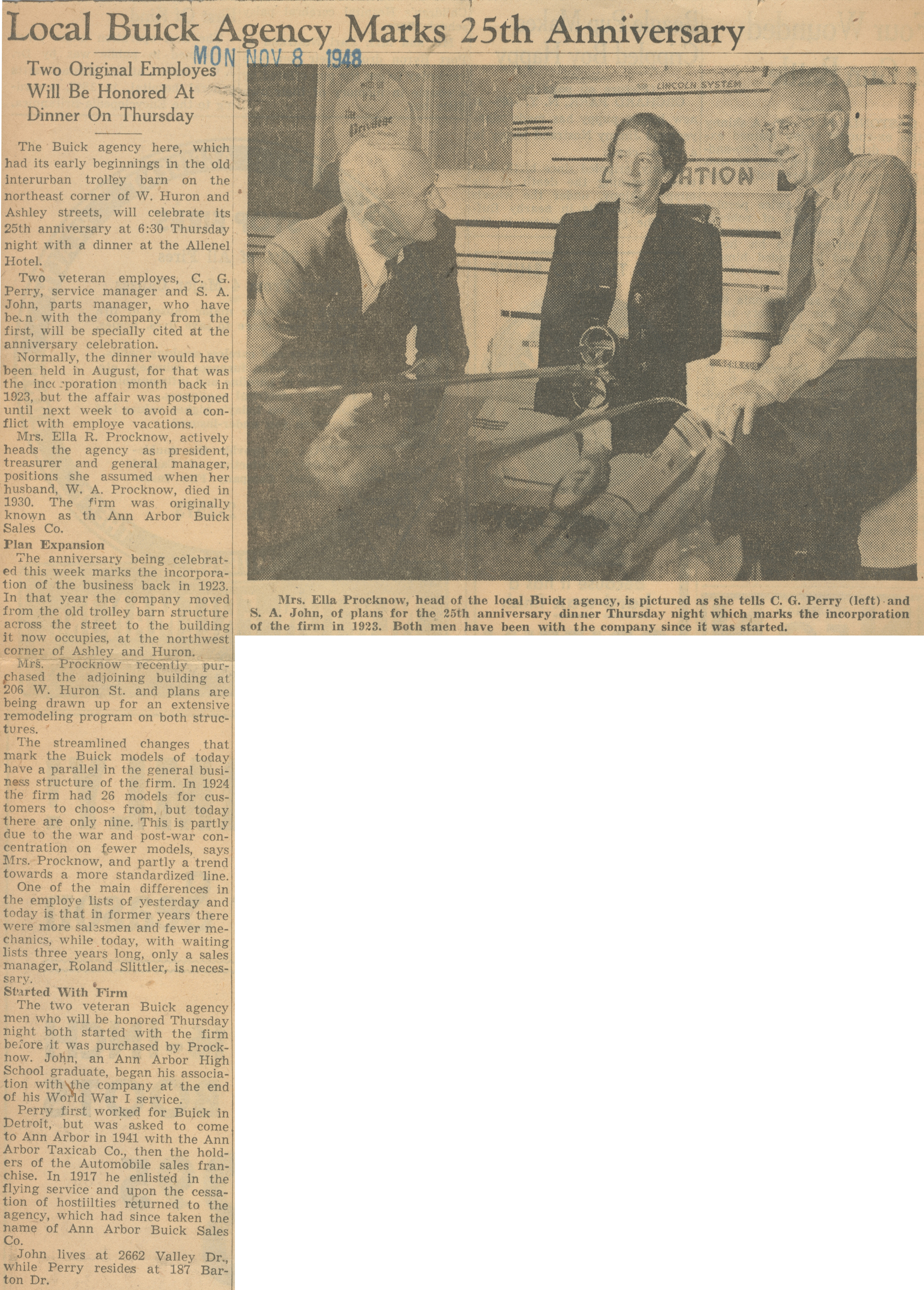 Two Original Employes Will Be Honored At Dinner On Thursday

The Buick agency here, which had its early beginnings in the old interurban trolley barn on the northeast corner of W. Huron and Ashley streets, will celebrate its 25th anniversary at 6:30 Thursday, night with a dinner at the Allenel Hotel

Two veteran employes, C. G. Perry, service manager and S. A. John, parts manager, who have been with the company from the first, will be specially cited at the anniversary celebration.

Normally, the dinner would have been held in August, for that was the incorporation month back in 1923, but the affair was postponed until next week to avoid a conflict with employe vacations.

Mrs. Ella R. Procknow, actively heads the agency as president, treasurer and general manager, positions she assumed when her husband, W. A. Procknow, died in 1930. The firm was originally known as the Ann Arbor Buick Sales Co.

The anniversary being celebrated this week marks the incorporation of the business back in 1923. In that year the company moved from the old trolley barn structure across the street to the building it now occupies, at the northwest corner of Ashley and Huron.

Mrs. Procknow recently purchased the adjoining building at 206 W. Huron St. and plans are being drawn up for an extensive remodeling program on both structures.

The streamlined changes that mark the Buick models of today have a parallel in the general business structure of the firm. In 1924 the firm had 26 models for customers to choose from, but today there are only nine. This is partly due to the war and post-war concentration on fewer models, says Mrs. Procknow, and partly a trend towards a more standardized line.

One of the main differences in the employe lists of yesterday and today is that in former years there were more salesmen and fewer mechanics, while today, with waiting lists three years long, only a sales manager, Roland Slittler, is necessary.

The two veteran Buick agency men who will be honored Thursday night both started with the firm before it was purchased by Procknow. John, an Ann Arbor High School graduate, began his association with the company at the end of his World War I service.

Perry first worked for Buick in Detroit, but was asked to come to Ann Arbor in 1941 with the Ann Arbor Taxicab Co., then the holders of the Automobile sales franchise. In 1917 he enlisted in the flying service and upon the cessation of hostilities returned to the agency, which had since taken the name of Ann Arbor Buick Sales Co.