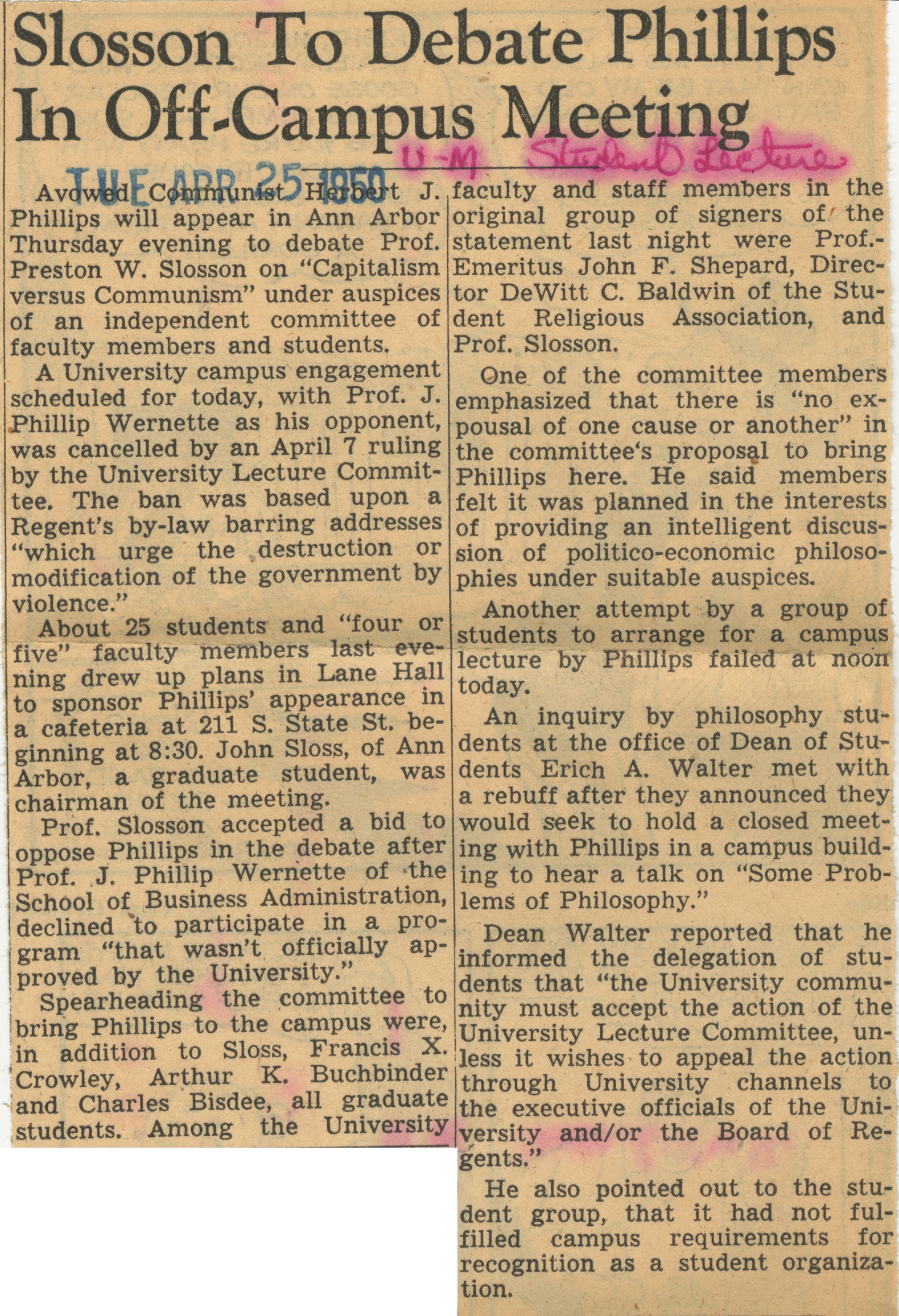 Avowed Communist Herbert J. Phillips will appear in Ann Arbor Thursday evening to debate Prof. Preston W. Slosson on "Capitalism versus Communism” under auspices of an independent committee of faculty members and students.

A University campus engagement scheduled for today, with Prof. J. Phillip Wernette as his opponent, was cancelled by an April 7 ruling by the University Lecture Committee. The ban was based upon a Regent’s by-law barring addresses "which urge the destruction or modification of the government by violence.”

About 25 students and "four or five” faculty members last evening drew up plans in Lane Hall to sponsor Phillips’ appearance in a cafeteria at 211 S. State St. beginning at 8:30. John Sloss, of Ann Arbor, a graduate student, was chairman of the meeting.

Prof. Slosson accepted a bid to oppose Phillips in the debate after Prof. J. Phillip Wernette of the School of Business Administration, declined to participate in a program "that wasn’t officially approved by the University.”

Spearheading the committee to bring Phillips to the campus were, in addition to Sloss, Francis X. Crowley, Arthur K. Buchbinder and Charles Bisdee, all graduate students. Among the University faculty and staff members in the original group of signers of the statement last night were Prof.-Emeritus John F. Shepard, Director DeWitt C. Baldwin of the Student Religious Association, and Prof. Slosson.

One of the committee members emphasized that there is “no expousal of one cause or another” in the committee’s proposal to bring Phillips here. He said members felt it was planned in the interests of providing an intelligent discussion of politico-economic philosophies under suitable auspices.

Another attempt by a group of students to arrange for a campus lecture by Phillips failed at noon today.

An inquiry by philosophy students at the office of Dean of Students Erich A. Walter met with rebuff after they announced they would seek to hold a closed meeting with Phillips in a campus building to hear a talk on “Some Problems of Philosophy.”

He also pointed out to the student group, that it had not fulfilled campus requirements for recognition as a student organization.