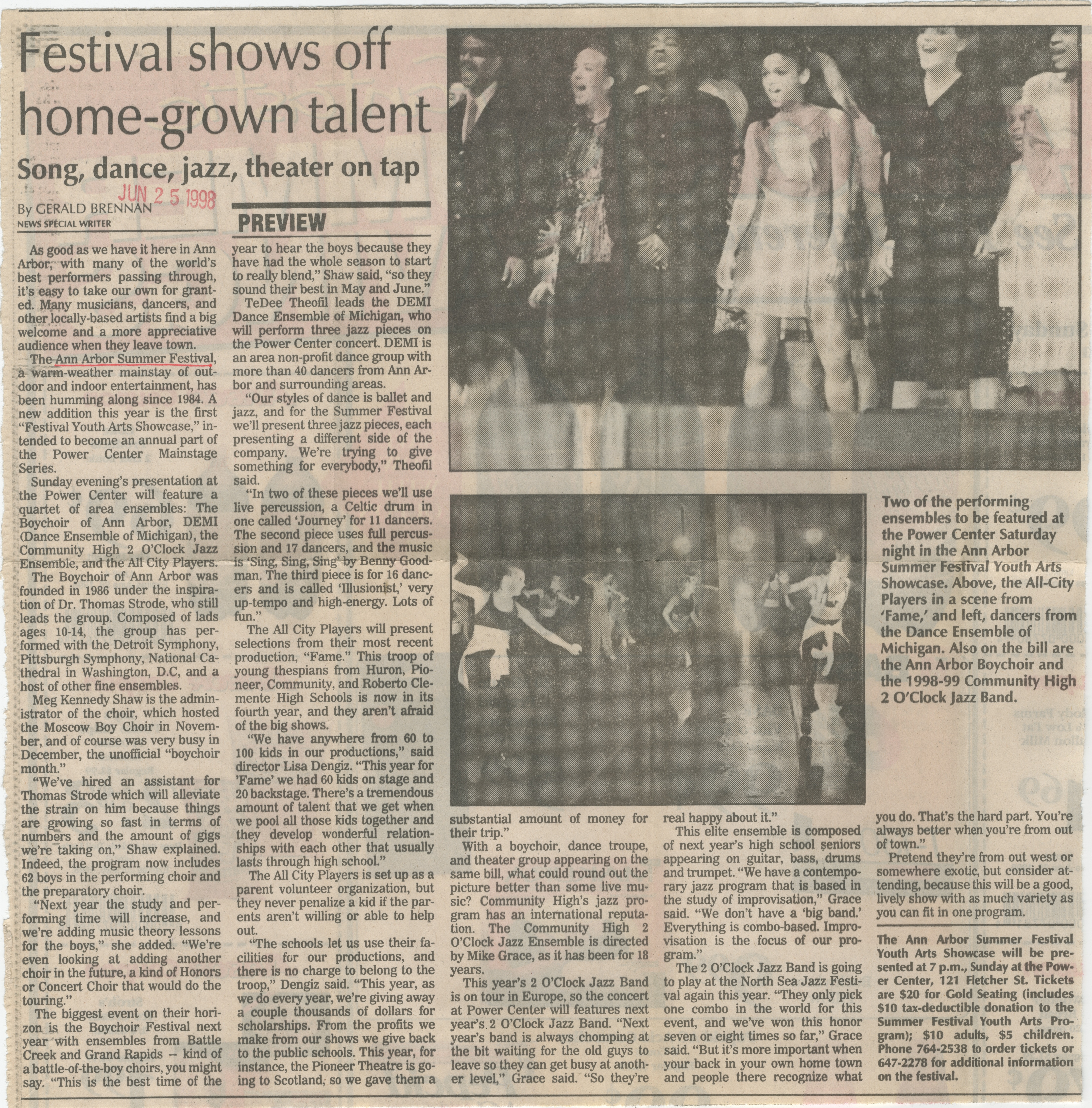 As good as we have it here in Ann Arbor; with many of the world’s best performers passing through, it’s easy to take our own for granted. Many musicians, dancers, and other.locally-based artists find a big welcome and a more appreciative audience when they leave town.

The-Ann Arbor Summer Festival, a warm-weather mainstay of out-door and indoor entertainment, has been humming along since 1984. A new addition this year is the first “Festival Youth Arts Showcase,” intended to become an annual part of the Power Center Mainstage Series.

Sunday evening’s presentation at the Power Center will feature a quartet of area ensembles: The Boychoir of Ann Arbor, DEMI (Dance Ensemble of Michigan), the Community High 2 O’clock Jazz Ensemble, and the All City Players.

The Boychoir of Ann Arbor was founded in 1986 under the inspiration of Dr. Thomas Strode, who still leads the group. Composed of lads ages 10-14, the group has performed with the Detroit Symphony, Pittsburgh Symphony, National Cathedral in Washington, D.C, and a host of other fine ensembles.

Meg Kennedy Shaw is the administrator of the choir, which hosted the Moscow Boy Choir in November, and of course was very busy in December, the unofficial “boychoir month.”

“We’ve hired an assistant for Thomas Strode which will alleviate the strain on him because things are growing so fast in terms of numbers and the amount of gigs we’re taking on,” Shaw explained. Indeed, the program now includes 62 boys in the performing choir and the preparatory choir.

“Next year the study and performing time will increase, and we’re adding music theory lessons for the boys,” she added. “We’re even looking at adding another choir in the future, a kind of Honors or Concert Choir that would do the touring.”

The biggest event on their horizon is the Boychoir Festival next year with ensembles from Battle Creek and Grand Rapids - kind of a battle-of-the-boy choirs, you might say. “This is the best time of the year to hear the boys because they have had the whole season to start to really blend,” Shaw said, “so they sound their best in May and June.”

TeDee Theofil leads the DEMI Dance Ensemble of Michigan, who will perform three jazz pieces on the Power Center concert. DEMI is an area non-profit dance group with more than 40 dancers from Ann Arbor and surrounding areas.

“Our styles of dance is ballet and jazz, and for the Summer Festival we’ll present three jazz pieces, each presenting a different side of the company. We’re trying to give something for everybody,” Theofil said.

“In two of these pieces we’ll use live percussion, a Celtic drum in one called ‘Journey’ for 11 dancers. The second piece uses full percussion and 17 dancers, and the music is ‘Sing, Sing, Sing’ by Benny Goodman. The third piece is for 16 dancers and is called ‘Illusionist,’ very up-tempo and high-energy. Lots of fun.”

The All City Players will present selections from their most recent production, “Fame." This troop of young thespians from Huron, Pioneer, Community, and Roberto Clemente High Schools is now in its fourth year, and they aren’t afraid of the big shows.

“We have anywhere from 60 to 100 kids in our productions,” said director Lisa Dengiz. “This year for ’Fame’ we had 60 kids on stage and 20 backstage. There’s a tremendous amount of talent that we get when we pool all those kids together and they develop wonderful relationships with each other that usually lasts through high school.”

The All City Players is set up as a parent volunteer organization, but they never penalize a kid if the parents aren’t willing or able to help out.

“The schools let us use their facilities for our productions, and there is no charge to belong to the troop,” Dengiz said. “This year, as we do every year, we’re giving away a couple thousands of dollars for scholarships. From the profits we make from our shows we give back to the public schools. This year, for instance, the Pioneer Theatre is going to Scotland, so we gave them a substantial amount of money for their trip.”

With a boychoir, dance troupe, and theater group appearing on the same bill, what could round out the picture better than some live music? Community High’s jazz program has an international reputation. The Community High 2 O’clock Jazz Ensemble is directed by Mike Grace, as it has been for 18 years.

This elite ensemble is composed of next year’s high school seniors appearing on guitar, bass, drums and trumpet. “We have a contemporary jazz program that is based in the study of improvisation," Grace said. “We don’t have a ‘big band.’ Everything is combo-based. Improvisation is the focus of our program.”

The 2 O’clock Jazz Band is going to play at the North Sea Jazz Festival again this year. “They only pick one combo in the world for this event, and we’ve won this honor seven or eight times so for,” Grace said. “But it’s more important when your back in your own home town and people there recognize what you do. That’s the hard part. You’re always better when you’re from out of town.”

Pretend they’re from out west or somewhere exotic, but consider attending, because this will be a good, lively show with as much variety as you can fit in one program.

Two of the performing ensembles to be featured at the Power Center Saturday night in the Ann Arbor Summer Festival Youth Arts Showcase. Above, the All-City Players in a scene from 'Fame/ and left, dancers from the Dance Ensemble of Michigan. Also on the bill are the Ann Arbor Boychoir and the 1998-99 Community High 2 O'clock Jazz Band.

The Ann Arbor Summer Festival Youth Arts Showcase will be presented at 7 p.m., Sunday at the Power Center, 121 Fletcher St. Tickets are $20 for Gold Seating (includes $10 tax-deductible donation to the Summer Festival Youth Arts Program); $10 adults, $5 children. Phone 764-2538 to order tickets or 647-2278 for additional information on the festival.