Growing Up In Ypsilanti 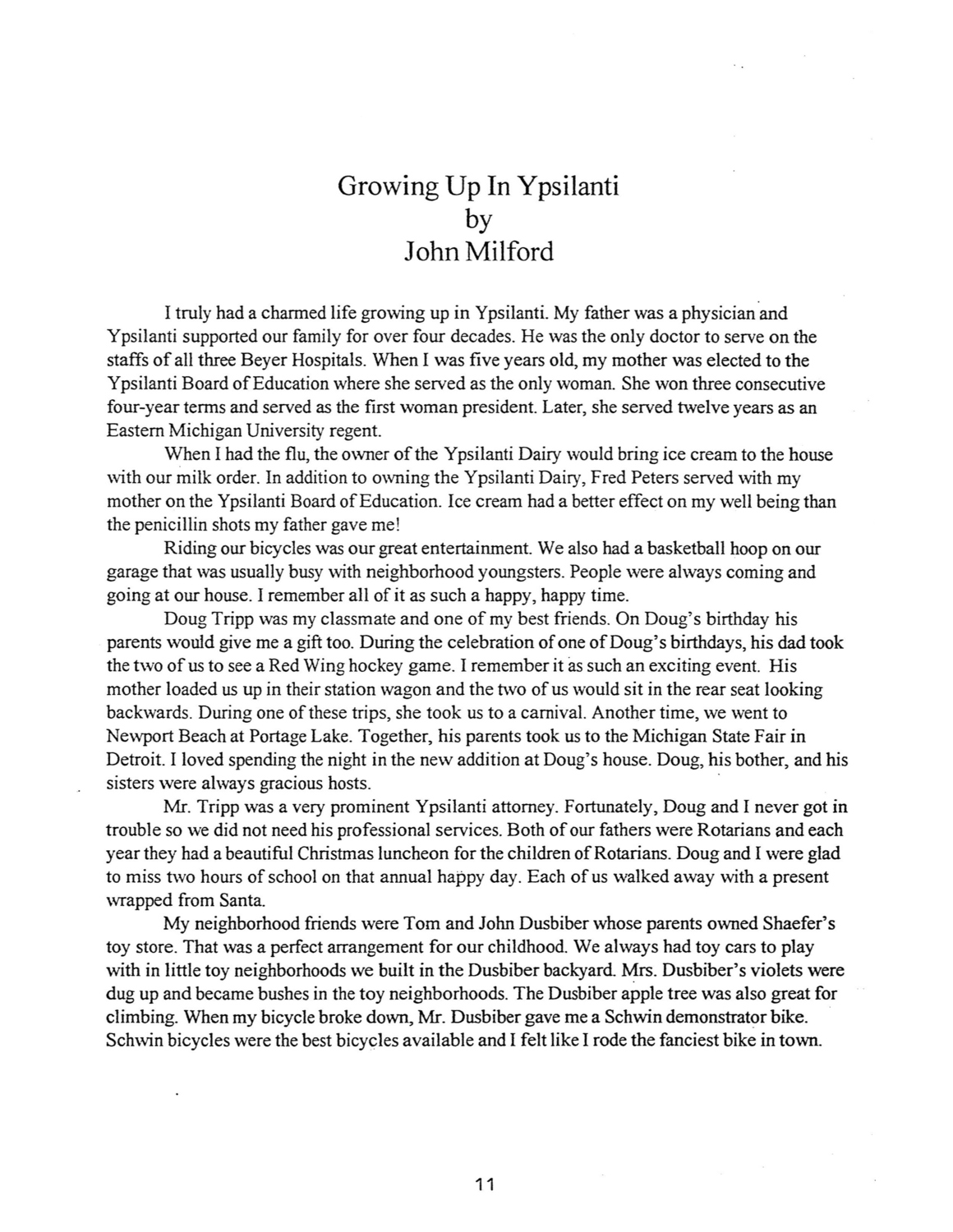 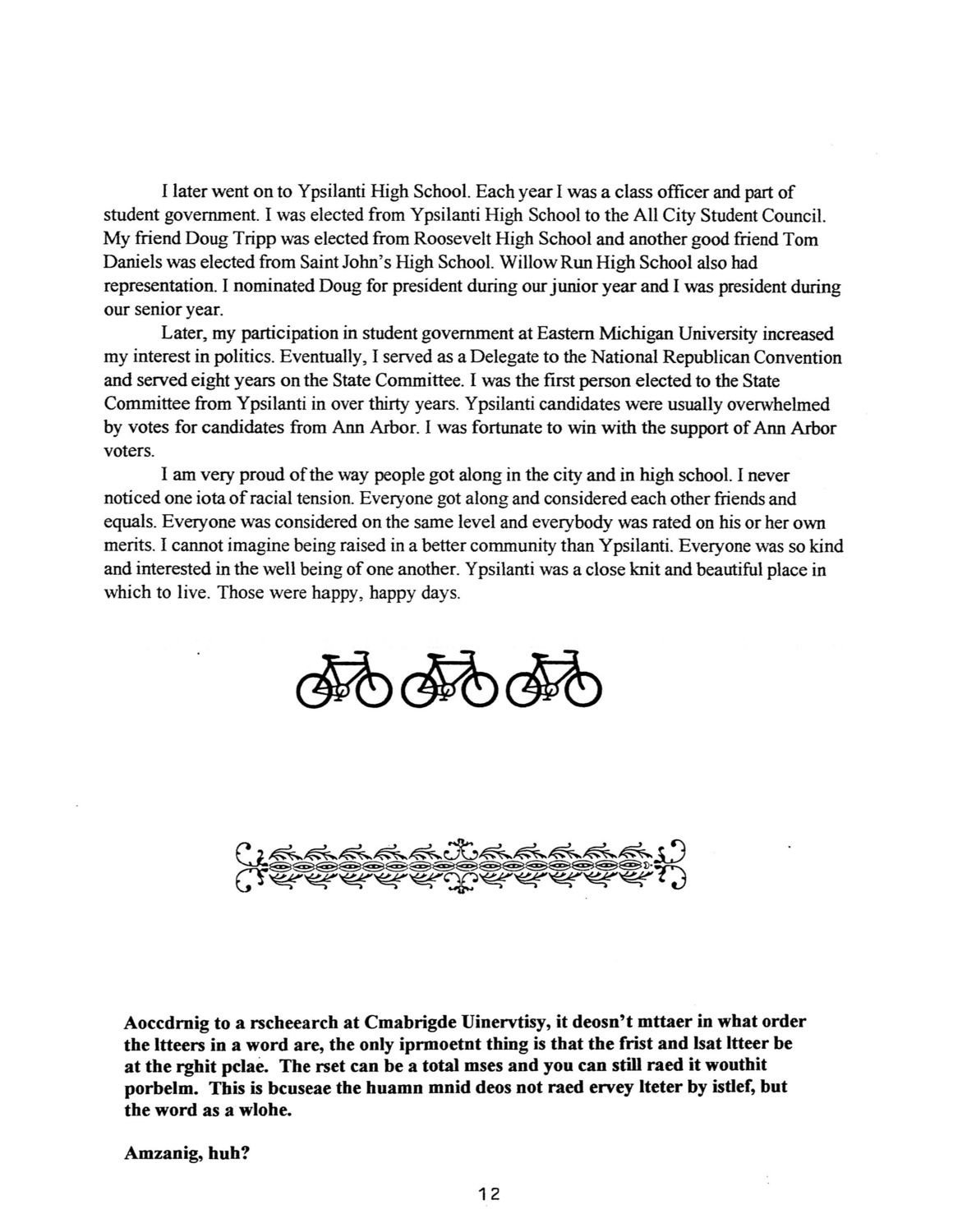 I truly had a charmed life growing up in Ypsilanti. My father was a physician and Ypsilanti supported our family for over four decades. He was the only doctor to serve on the staffs of all three Beyer Hospitals. When I was five years old, my mother was elected to the Ypsilanti Board of Education where she served as the only woman. She won three consecutive four-year terms and served as the first woman president. Later, she served twelve years as an Eastern Michigan University regent.

When I had the flu, the owner of the Ypsilanti Dairy would bring ice cream to the house with our milk order. In addition to owning the Ypsilanti Dairy, Fred Peters served with my mother on the Ypsilanti Board of Education. Ice cream had a better effect on my well being than the penicillin shots my father gave me!

Riding our bicycles was our great entertainment. We also had a basketball hoop on our garage that was usually busy with neighborhood youngsters. People were always coming and going at our house. I remember all of it as such a happy, happy time.

Doug Tripp was my classmate and one of my best friends. On Doug's birthday his parents would give me a gift too. During the celebration of one of Doug's birthdays, his dad took the two of us to see a Red Wing hockey game. I remember it as such an exciting event. His mother loaded us up in their station wagon and the two of us would sit in the rear seat looking backwards. During one of these trips, she took us to a carnival. Another time, we went to Newport Beach at Portage Lake. Together, his parents took us to the Michigan State Fair in Detroit. I loved spending the night in the new addition at Doug's house. Doug, his bother, and his sisters were always gracious hosts.

Mr. Tripp was a very prominent Ypsilanti attorney. Fortunately, Doug and I never got in trouble so we did not need his professional services. Both of our fathers were Rotarians and each year they had a beautiful Christmas luncheon for the children of Rotarians. Doug and I were glad to miss two hours of school on that annual happy day. Each of us walked away with a present wrapped from Santa.

My neighborhood friends were Tom and John Dusbiber whose parents owned Shaefer's toy store. That was a perfect arrangement for our childhood. We always had toy cars to play with in little toy neighborhoods we built in the Dusbiber backyard. Mrs. Dusbiber's violets were dug up and became bushes in the toy neighborhoods. The Dusbiber apple tree was also great for climbing. When my bicycle broke down, Mr. Dusbiber gave me a Schwin demonstrator bike. Schwin bicycles were the best bicycles available and I felt like I rode the fanciest bike in town.

Later, my participation in student government at Eastern Michigan University increased my interest in politics. Eventually, I served as a Delegate to the National Republican Convention and served eight years on the State Committee. I was the first person elected to the State Committee from Ypsilanti in over thirty years. Ypsilanti candidates were usually overwhelmed by votes for candidates from Ann Arbor. I was fortunate to win with the support of Ann Arbor voters.

I am very proud of the way people got along in the city and in high school. I never noticed one iota of racial tension. Everyone got along and considered each other friends and equals. Everyone was considered on the same level and everybody was rated on his or her own merits. I cannot imagine being raised in a better community than Ypsilanti. Everyone was so kind and interested in the well being of one another. Ypsilanti was a close knit and beautiful place in which to live. Those were happy, happy days.

Aoccdrnig to a rscheearch at Cmabrigde Uinervtisy, it deosn't mttaer in what order the ltteers in a word are, the only iprmoetnt thing is that the frist and lsat ltteer be at the rghit pclae. The rset can be a total mses and you can still raed it wouthit porbelm. This is bcuseae the huamn mnid deos not raed ervey lteter by istlef, but the word as a wlohe.