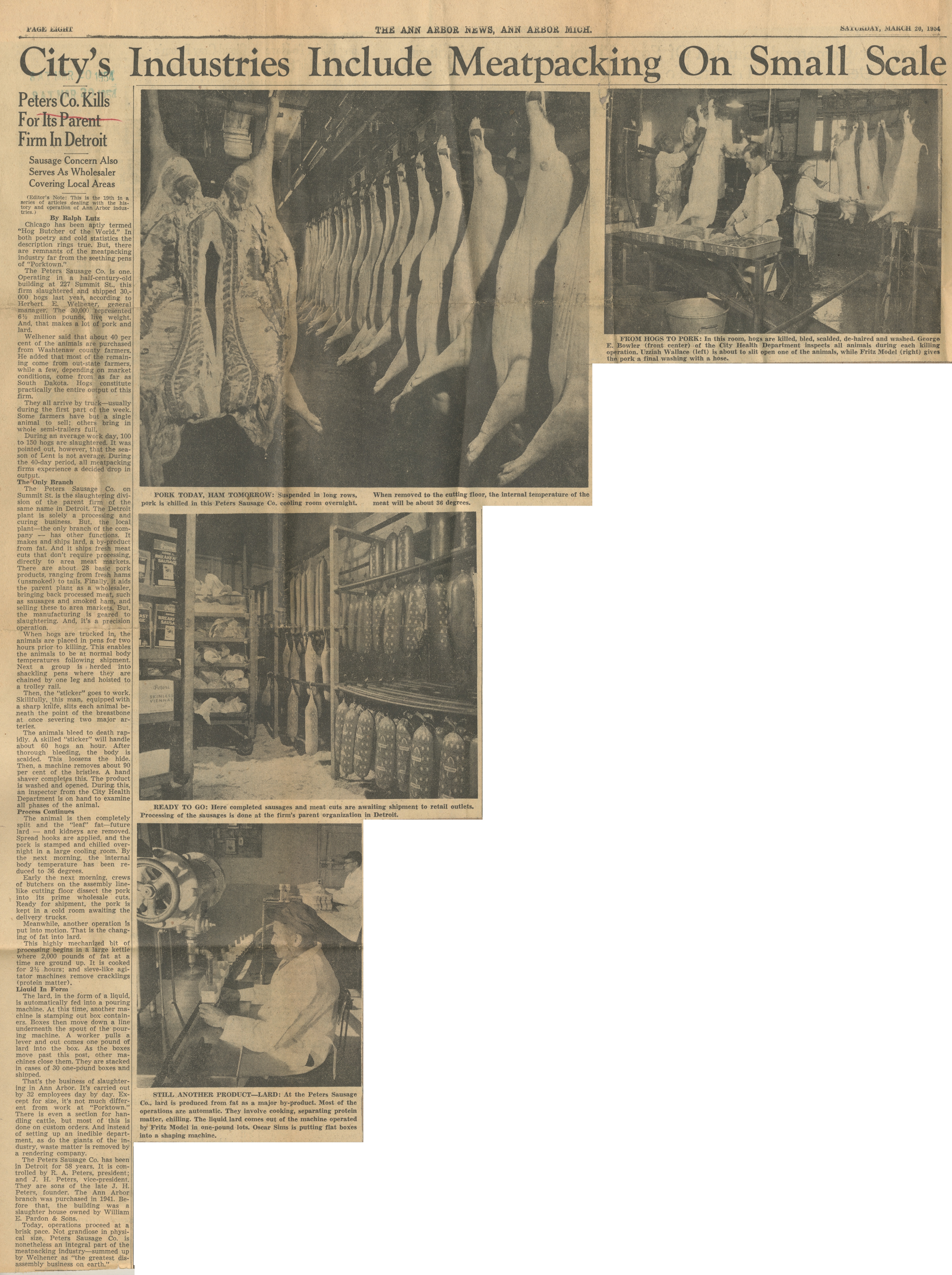 Peters Co. Kills For Its Parent Firm In Detroit
Sausage Concern Also Serves As Wholesaler Covering Local Areas
(Editor's Note: This is the 19th in a series of articles dealing with the history and operation of Ann Arbor industries.)

By Ralph Lutz Chicago has been aptly termed "Hog Butcher of the World." In both poetry and cold statistics the description rings true. But, there are remnants of the meatpacking industry far from the seething pens of "Porktown."

The Peters Sausage Co. is one. Operating in a half-century-old building at 227 Summit St., this firm slaughtered and shipped 30,000 hogs last year, according to Herbert E. Welhener general manager. The 30,000 represented 672 million pounds, live weight. And, that makes a lot of pork and lard.
Welhener said that about 40 percent of the animals are purchased from Washtenaw county farmers. He added that most of the remaining come from out-state farmers, while a few, depending on market conditions, come from as far as South Dakota. Hogs constitute practically the entire output of this firm.

They all arrive by truck-usually during the first part of the week. Some farmers have but a single animal to sell; others bring in whole semi-trailers full.

During an average work day, 100 to 150 hogs are slaughtered. It was pointed out, however, that the season of Lent is not average. During the 40-day period, all meatpacking firms experience a decided drop in output. The Only Branch The Peters Sausage Co. on Summit St. is the slaughtering division of the parent firm of the same name in Detroit. The Detroit plant is solely a processing and curing business. But, the local plant-the only branch of the company has other functions. It makes and ships lard, a by-product from fat. And it ships fresh meat cuts that don't require processing, directly to area meat markets. There are about 28 basic pork products, ranging from fresh hams (unsmoked) to tails. Finally, it aids the parent plant as a wholesaler, bringing back processed meat, such as sausages and smoked ham, and selling these to area markets. But, the manufacturing is geared to slaughtering. And, it's a precision operation.

When hogs are trucked in, the animals are placed in pens for two hours prior to killing. This enables the animals to be at normal body temperatures following shipment. Next a group is herded into shackling pens where they are chained by one leg and hoisted to a trolley rail.
Then, the "sticker" goes to work. Skillfully, this man, equipped with a sharp knife, slits each animal beneath the point of the breastbone at once severing two major arteries.

The animals bleed to death rapidly. A skilled "sticker" will handle about 60 hogs an hour. After thorough bleeding, the body is scalded. This loosens the hide. Then, a machine removes about 90 per cent of the bristles. A hand shaver completes this. The product is washed and opened. During this, an inspector from the City Health Department is on hand to examine all phases of the animal. Process Continues
The animal is then completely split and the "leaf" fat-future lard -- and kidneys are removed. Spread hooks are applied, and the pork is stamped and chilled overnight in a large cooling room. By the next morning, the internal body temperature has been reduced to 36 degrees.

Early the next morning, crews of butchers on the assembly linelike cutting floor dissect the pork into its prime Wholesale cuts. Ready for shipment, the pork is kept in a cold room awaiting the delivery trucks.
Meanwhile, another operation is put into motion. That is the changing of fat into lard.
This highly mechanized bit of processing begins in a large kettle where 2,000 pounds of fat at a time are ground up. It is cooked for 212 hours; and sieve-like agitator machines remove cracklings (protein matter). Liquid In Form
The lard, in the form of a liquid, is automatically fed into a pouring machine. At this time, another machine is stamping out box containers. Boxes then move down a line underneath the spout of the pouring machine. A worker pulls a lever and out comes one pound of lard into the box. As the boxes move past this post, other machines close them. They are stacked in cases of 30 one-pound boxes and shipped.
That's the business of slaughtering in Ann Arbor. It's carried out by 32 employees day by day. Except for size, it's not much different from work at "Porktown.” There is even a section for handling cattle, but most of this is done on custom orders. And instead of setting up an inedible department, as do the giants of the industry, waste matter is removed by a rendering company.

The Peters Sausage Co. has been in Detroit for 58 years. It is controlled by R. A. Peters, president; and J. H. Peters, vice-president. They are sons of the late J. H. Peters, founder. The Ann Arbor branch was purchased in 1941. Before that, the building was a slaughter house owned by William E. Pardon & Sons.

Today, operations proceed at a brisk pace. Not grandiose in physical size, Peters Sausage Co. is nonetheless an integral part of the meatpacking industry-summed up by Welhener as “the greatest disassembly business on earth."

PORK TODAY, HAM TOMORROW: Suspended in long rows, pork is chilled in this Peters Sausage Co. cooling room overnight.
When removed to the cutting floor, the internal temperature of the meat will be about 36 degrees.

READY TO GO: Here completed sausages and meat cuts are awaiting shipment to retail outlets. Processing of the sausages is done at the firm's parent organization in Detroit.

STILL ANOTHER PRODUCT_LARD: At the Peters Sausage Co., lard is produced from fat as a major by-product. Most of the operations are automatic. They involve cooking, separating protein matter, chilling. The liquid lard comes out of the machine operated by Fritz Model in one-pound lots. Osear Sims is putting flat boxes into a shaping machine.

FROM HOGS TO PORK: In this room, hogs are killed, bled, scalded, de-haired and washed. George E. Bowler (front center) of the City Health Department inspects all animals during each killing operation. Uzziah Wallace (left) is about to slit open one of the animals, while Fritz Model (right) gives the pork a final washing with a hose.